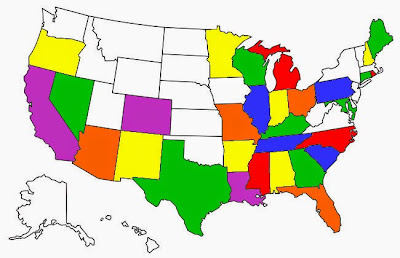 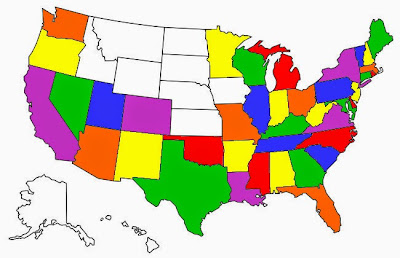 I should and do know better! Less than two months ago, I even wrote an article about wheelchairs and hotel safety.

Like clockwork, Laurel woke up early and wanted to go down for breakfast. As I was staggering around the room to get ready, we started to hear an alarm. It sounded like someone's alarm clock going off in a near-by room. Laurel and I left Lisa to shower and Kellisa to sleep longer. We walked down the hallway and Laurel pressed the elevator's down button. As we stood there and waited, Laurel said, "I smell smoke".

Once Laurel mentioned smoke, I realized that I could also smell something burning. The elevator came and we started to get on when I had second thoughts. To be safe, we went back to the room to get Lisa and Kellisa. We were barely in the room when all hell broke loose. We could hear a man and woman in the hallway, both pounding on doors and screaming, "The building is on fire"!

I know the first and only thought should be getting out safely, but I had two more thoughts as well. First, we need to grab the medicine for the kids. We can't be a 1,000 miles from home without them. And second, we had Kellisa's Hippocampe chair and I wasn't leaving that behind. (I also grabbed our bag with all our electronics)

In less than a minute we were out in the hallway which was now full of smoke and people. A police officer was yelling to get out by using the stairs. As soon as he saw me pushing Kellisa, he offered to help. I knew I could get Kellisa (and her chair out safely) and advised him that we were OK. I told Laurel to go and she ran down the stairs, out the hotel and gathered with the crowd of hotel guests in the grass.

I slowly pushed Kellisa down the stairs as people were backed up and screaming. Normally, she would have loved this activity, but she wasn't really awake yet. I knew I could get down the stairs, but I was worried about people pushing. Not a single person pushed and I even heard a few offer to help. We reunited with Laurel outside and we quickly learned that everyone was out of the hotel and safe. I was relieved for only a few seconds. I did an inventory check of everything I grabbed and realized that I didn't have the medicine.

The fire was contained to two rooms, about four rooms down from us on the other side of the hall. I knew our room was safe and if the medicine was in the room, we'd be OK. However, I was worried that I dropped the medicine on the way out and it could have gotten destroyed, ruined or even taken. I had to sweat it out for a couple of hours before the fire chief escorted me to our room to gather our belongings. I was relieved to find all the medicine on the edge of one of the beds. It's must have fallen out of my short's pocket in the rush to evacuate.

The police and firefighters did an amazing job to put the fire out and keep everyone safe and informed. Laurel was very scared at first and several first responders went above and beyond to make her feel safe. Thank you!

We had to move to another hotel and we made sure we got a room on the first floor!

An Uncomplicated Life
A Father's Memoir of His Exceptional Daughter
By: Paul Daugherty 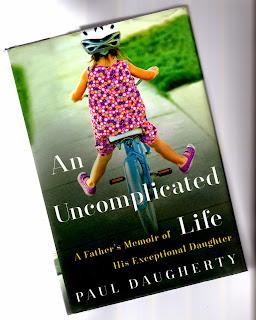 It should be no surprise that this book caught my eye and I bought it without a second thought. What surprised me and I couldn't explain it until today, something made me put down another book in the middle and start reading An Uncomplicated Life. The reason became clear after reading several chapters about the IEP process. Paul Daugherty shares some of their struggles and successes with the process while offering inspirational words to other families. Since we have a fight, I mean IEP meeting scheduled 12 days from now and I have many hours of training, I mean research and preparation to do, this book has given me new hope and resolve. I've read 22 out of 34 chapters, but would already highly recommend this great book to all families, both in and out of the disabled world.
﻿
Posted by Chris Kain at 11:37:00 AM No comments:

May 16, 2015
Laurel was working on some homework this morning and one of the assignments was to draw a picture (below) of what she wants to do during her summer vacation. 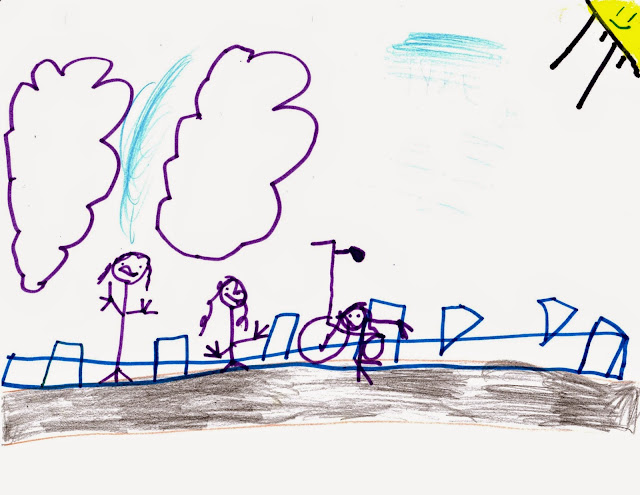 Daddy, Laurel and Kellisa pushiking across a bridge under a partly cloudy and sunny day somewhere in New York.
﻿
Posted by Chris Kain at 10:01:00 AM No comments: 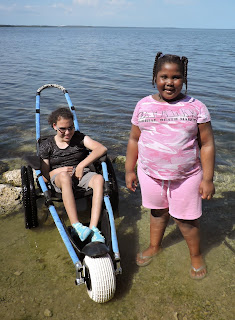 South Florida
March 2015
We ended our 2015 spring break trip at Miccosukee Indian Village. Laurel heard the captain on our boat tour of the Everglades explaining what life was like for the Indians who lived in the Everglades and she tried relating it to the Indians and Pilgrims she learned about in school.  After the boat tour, Laurel had millions of questions about Indians and she expressed a strong desire to meet some Indians. After a quick search, we found a tourist trap located in the middle of the Everglades, but it had real Indians. It also had alligator shows which I'm not a huge fan of, but both girls really enjoyed the action. However, the highlight for both girls was holding a real life alligator. We also enjoyed the rest of the village: a museum, archery for kids, and boardwalk complete with a Totem Pole. ﻿ 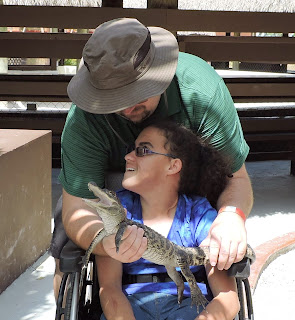 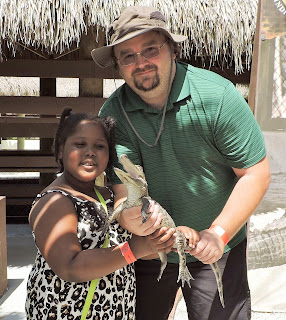