May 23, 2017 - Kellisa's 18th birthday! A huge accomplishment and cause for us to be proud as we celebrate her life to this point. I've been agonizing about my post for this day since I was at a loss for a narrative. Lisa came to the rescue and for the first time in this blog's history, Lisa has written a post about this day and our gift of flights to Kellisa for her birthday.


On Tuesday morning, we boarded "our" plane in Tampa, Florida just before 6 am Eastern time (3 am for us West Coast folks). At that point, all I knew was that we would be on that plane all day, and that our plane would travel to 8 destinations. I never expected what would happen over the next 21 hours -- or even that it would take 21 hours!


On that first flight, the flight crew announced that they had a VIP on board celebrating her 18th birthday with a day of flight. The passengers sang and cheered for Kellisa. This occurred on every flight and made Kellisa feel very special. This experience alone would have more than satisfied our quest to make her day special, but what followed was more than we could ever have expected.


From Tampa, we went to New Orleans. When we landed, passengers stopped by our front row seats to wish Kellisa a happy birthday, shake her hand, give her five, and take selfies with her. After all the departing passengers left the plane, the ground crew came aboard with their own mobile party. They brought an unbelievable level of excitement to our journey. This celebration occurred at every stop, except one.

When we stopped in Orlando, we were asked to deplane. A man in a tuxedo boarded the plane and escorted us off the plane. When Kellisa exited the jetway, the entire gate area had been decorated for her and people cheered and sang. We had approximately 20 minutes on the ground before being escorted back to our newly decorated spot on the plane. 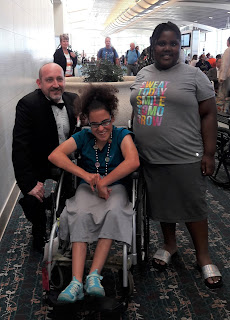 Some other highlights included birthday signs on the runway, a lights display by the San Diego Police Department, and a finish line birthday celebration in Sacramento. 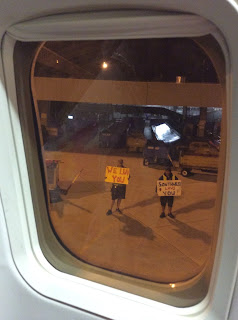 Kellisa was not the only star on Tuesday. Laurel was an honorary flight attendant handing out snacks to passengers on several flights and helping with the safety announcement on one flight. She also sat in the pilot's seat in Nashville to learn about the instruments that fly the plane. 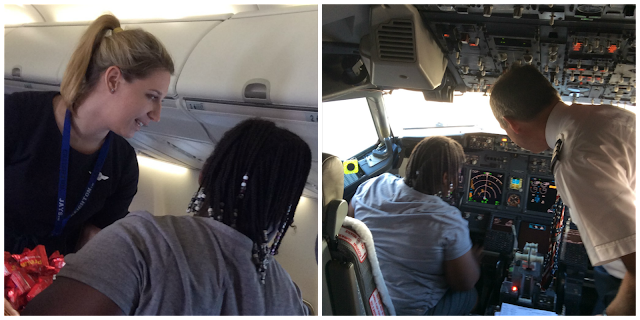 Our 20.5 hour trip included stops all over the Southern US. We went from Tampa, to New Orleans, to Dallas, to Columbus, to Orlando, to Nashville, to Phoenix, to San Diego, and ended in Sacramento at 11:30 pm. Kellisa did not nap away one second of her special day, and was actually asking for more bye-bye at the Sacramento airport.

I can only imagine what you are thinking after reading the above information, and yes we are crazy. I have never denied that fact. I am sure you are wondering why. Well, Kellisa loves to travel. She likes all forms of travel, planes, trains, boats, buses, and cars. She especially loves the take off and landing on an airplane. That is why Chris wanted to have as many commercial flights in one day as possible. 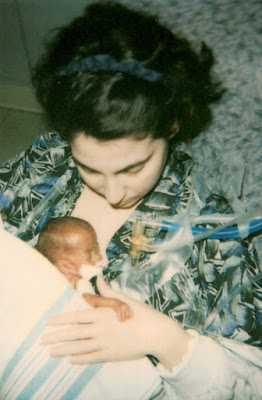 Today is Kellisa's actual 18th birthday. Most parents can envision their children reaching this important life milestone, but we are not most parents. We were told before Kellisa was born that she would only live 24 to 48 hours. Clearly, that 2 pound 1 ounce fragile baby has grown into a very strong young lady. Eighteen years is a very big deal for her and for us especially considering she is the only one of our natural children that has celebrated a birthday. In general, we keep a pretty positive outlook, but it can be difficult. Over the last 5 years, we have lost 5 of Kellisa's friends to their disabilities including 1 that passed earlier this month. So we do get a bit emotional and over the top with Kellisa's birthday because it is a reminder of how lucky we are to have her in our lives.

Kellisa touched the hearts of many people on her 18th Birthday Celebration Tour as she literally met hundreds of new friends. We believe her ability to connect with and bring out the best in people is her life's purpose and we look forward to many more years on this crazy journey.