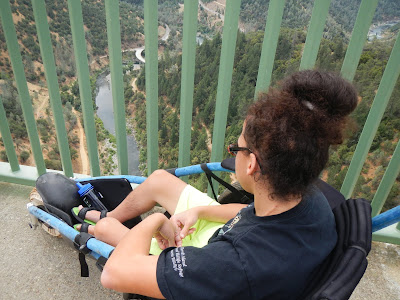 Out of the blue, my phone started alarming with notices from the Sacramento Bee. There was a traffic situation in Auburn, approximately 20 miles from our house. The police had blocked traffic around the Foresthill Bridge because there was a jumper situation.

We had driven across the bridge and even hiked under it, but until I received the alerts, I never realized the bridge towers 730 feet over the North Fork of the American River, making it the highest bridge in California and 4th highest in the United States.

Two days after the jumper situation had the bridge closed for 4 hours, Kellisa and I had a few hours with nothing to do. It was only 81F outside, so we wanted to be outside, but didn't have enough time for a trail. My thoughts went back to the bridge. We've flirted with the idea of walking across bridges in the past, but many don't have lanes or walkways for pedestrians. The first and only bridge we've crossed was the Francis and Mary Usina Bridge back in St. Johns County, FL. A quick Internet search revealed that you could walk across the Foresthill Bridge on both sides. We now had a plan. 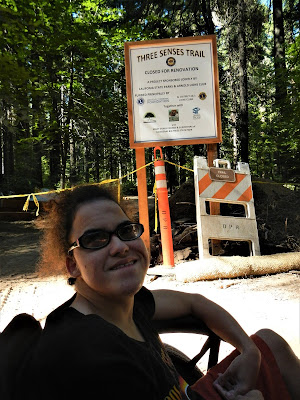 
We found the Three Senses Trail closed for renovation. Instead of driving to a sporting goods store to buy a BB gun because someone owed us an explanation, we decided to peacefully return once the trail is opened. 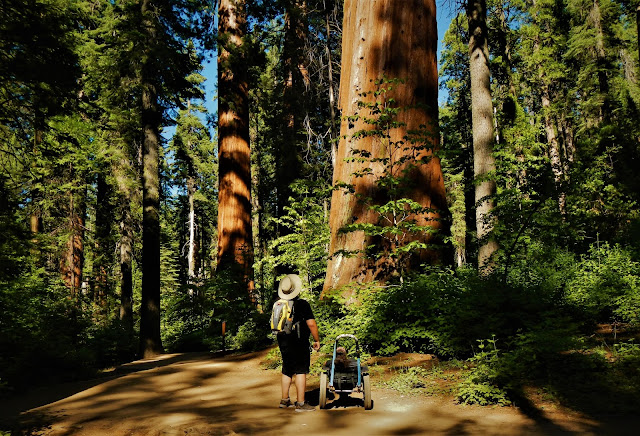 
Our second hike in Calaveras Big Trees State Park was the North Grove Trail. It was little longer Beaver Creek Trail and far more scenic. The trail is rated as accessible and except for one short narrow section with a few rocks that could be easily negotiated by most people in a wheelchair or jog stroller, this trail was perfect for pushing Kellisa.

Sometimes we want a challenging trail, especially Kellisa since it usually means more struggle for me and more bumps, but it's also nice to be able to push Kellisa on a longer trail without too much worry. And it's a huge bonus when the trail is highly scenic and the North Grove Trail did not disappoint as it weaved through many "big trees".
MORE WORDS AND PICTURES »
Posted by Chris Kain at 9:56:00 PM No comments: 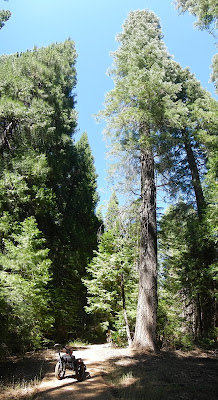 It was 101F degrees in the central valley of California. Too hot for hiking, especially considering that excessive heat is a trigger for seizures in Kellisa. We wanted to go on a hike, so we headed up into the mountains to check out Calaveras Big Trees State Park.

The park sits at an elevation of roughly 5,000 feet above sea level and there's a general rule that it cools off approximately 3 degrees for every thousand feet of elevation gain. Since the temperature reading in the car varied between 84F and 86F, the rule proved accurate.

We stopped at the visitor center to gather some information before deciding which trails to explore. It may seem odd to some, but the mid-80s temperature seemed a little "cool" under the shade of the big trees.

Normally we look for non-accessible trails because they're usually longer and a bit more challenging. A quick look at the trail guide revealed three accessible trails and with our recent struggles with accessible trails in Idaho, we decided to attempt all three trails while scoping out the regular trails for future opportunities. We decided to start with the Beaver Creek Trail because it was the shortest and farthest from the entrance. We thought it would be a great warm up while getting a quick feel for the entire park from the main road. The trail was short, but 100% accessible. We weren't disappointed.
MORE WORDS AND PICTURES »
Posted by Chris Kain at 11:27:00 AM No comments:

Driving into a Horror Movie Scene

The dead-end road to the Settlers Grove of Ancient Cedars was long and rough through a deep forest in northern Idaho. Kellisa loved the rocks, potholes, and overall "bumpiness". We spent maybe two hours on the trail and enjoying a snack back at the rental truck after our hike before we returned to the forest road. We didn't see another human the entire time on our adventure to see the ancient cedars. As I was driving out, I came around a corner and came to a sudden stop. We were next to an old pickup partially blocking the road and maybe 10 yards in front of us, a tree was blocking the road and there was a man with a chainsaw. We were behind him and he couldn't see or hear us.

My heart starting beating out of my chest. There was only one way out and a tree and chainsaw wielding mountain man were blocking the way. I watched the man saw a few sections of the tree and when the saw powered down, I called out a friendly, "Hello" while smiling and waving from the safety inside my truck.

He waved back. I decided to get out and offer help. I was banking on the fact that this tree had fallen over and he was just clearing the road. At worst, I was hoping he was poaching a tree and wouldn't see us as a threat.

He told me that he was on his way to hike the same trail we just completed and he found the tree blocking the road....and he just happened to have his chainsaw with him ready to go. Maybe this is normal for the area, I don't know? As he cut the tree down to manageable pieces, I helped clear the road by rolling the pieces off to the side. As soon as we had a clear path, he told me that he could handle the rest and we could go on our way. We had our way out and he didn't have to tell me twice.

If he wanted to use the chainsaw on us, our bodies would have never been found. I don't know if the tree spontaneously fell, but I do know his pickup was between the tree and the trailhead. Since he said he was headed to the trail, if the tree fell spontaneously, it would have had to fall after he drove past. I suppose it's possible it fell and just missed his truck or maybe he saw it fall in his mirror.

I will never know for sure if the tree fell on it's own and he magically appeared with a chainsaw. There was a sign at the trailhead warning about limbs and trees falling because of recent fires. We were many miles from cell service and the nearest anything. We would have been stuck for probably a very long time if the tree did fall on its own and he wasn't there with his chainsaw. If he was poaching a tree, I'm thankful that he let us pass without any trouble.

Even in black and grizzly bear country, I'm a little more afraid of encountering other humans and this experience did nothing to change my mind. We cashed in some karma for sure, we just don't know how much we spent. 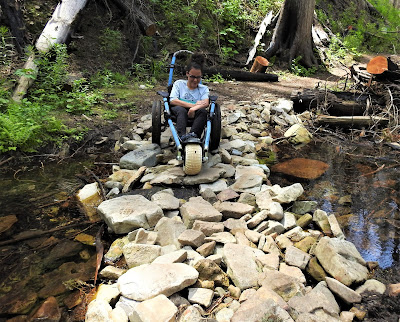 I'm beginning to think the state of Idaho has a different definition of "accessible" when they use it to describe trails as you can see by the picture to the right. For the second day in a row, Kellisa and I drove a great distance to hike a trail that by all accounts is accessible. Previous hike found here.

The trail started out as a wide, hard packed surface mostly flat through a dense forest, but the ground quickly included mud, rocks, roots, and narrow sections. The trail crossed a creek several times with nicely built bridges, but then there was a crossing of large rocks piled across the creek. I'm not sure if the bridge got washed out or burned in recent fires, but even if you could use a standard wheelchair on this trail, I can't imagine a wheelchair making it across this rock bridge.
MORE WORDS AND PICTURES »
Posted by Chris Kain at 10:57:00 PM No comments: 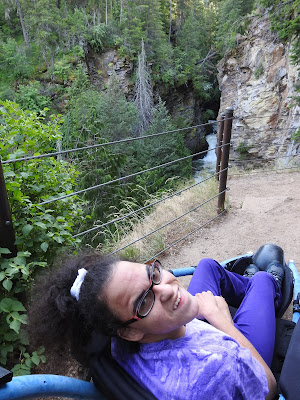 The Myrtle Falls Trail in the Kootenai National Wildlife Refuge was the main reason Kellisa and I made the long drive. Waterfalls remain mostly elusive for people who use wheels to go down trails. Very few have ADA paths and it's been our experience that due to the topography surrounding waterfalls, it's very hard to push Kellisa down non-ADA trails to experience the sights, sounds, and smells of a waterfall.

We were silly to believe that the trail would be accessible all the way to the waterfall just because they have the little blue and white wheelchair sign hanging with the Myrtle Falls Trailhead sign and the website leads you to believe the trail is accessible.

The trail starts off accessible for the first .15 of a mile. You can't even hear Myrtle Falls, let alone view it when the trail becomes a rugged path not developed for wheeled devices. Once the accessibility ended, the trail started to switch back up the side of a steep hill. The trail was barely wide enough for Kellisa's chair. Since the sun was setting, we were a tasty treat for all the local mosquitoes. I wanted to buy some bug spray on our drive, but forgot and we both paid a heavy price. We didn't let the mosquitoes or lack of accessibility stop us from reaching the viewing area for Myrtle Falls. We exchanged high fives, snapped a few pictures, and quickly descended the trail back to the waiting enclosure of our rental car. 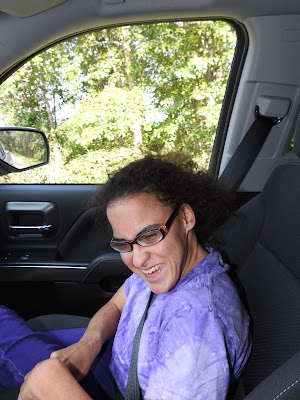 Kellisa and I recently found ourselves in the far north of Idaho where we spent a beautiful early evening exploring the wild Kootenai National Wildlife Refuge. We observed many birds (including an eagle- picture below) and turtles. Despite being deep in black and grizzly bear country, we did not see any bruins. We originally had the thought of hiking the gravel auto tour road, but our late in the day arrival didn't allow enough time and we had to be satisfied with a nice little drive. 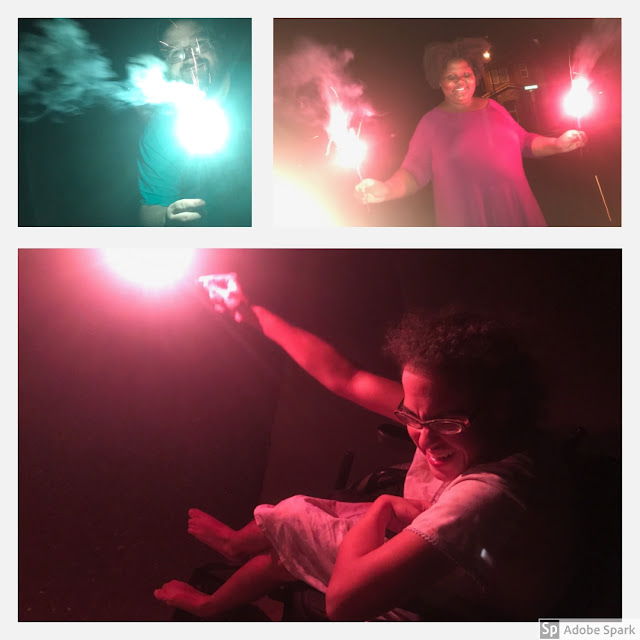