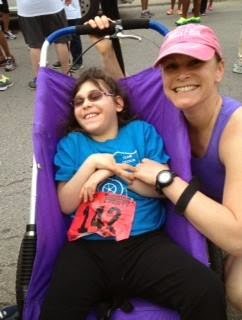 Kellisa's Path started out as a means to share Kellisa's adventures with friends and family. The blog has grown beyond it's intended purposes over the years as many strangers are interested in "Kellisa" and following her latest activities. In the last few years, we've even added an intrepid little sister, Laurel to our adventures. However, as things change, some unfortunately remain the same. It can feel like we are alone when out in the world because we still have only seen one other disabled child on a trail (we've hiked well over a 1,000 miles) and even though we've only been a part of a few organized races, Kellisa has been the only "wheelchair" competitor each time.

One nice thing about the Internet, we've realized that we are NOT alone. There are other children that are very similar to Kellisa who have parents that support them and allow them to enjoy the outdoor environment. Although, I still believe it's an extremely low percentage. I've always said it's sad that these kids are trapped in their bodies, but lets not also trap them in the inside world because it's the easy thing to do. They deserve to be outside like any other kid and I've always known that Kellisa can't be the only one who actually thrives when outside "doing" something fun.

It's been our pleasure to get to know an amazing girl from Kansas who shares many similarities with Kellisa. I'd like to point out one obvious similarity: huge smiles that are worth more than a 1,000 words and one less obvious: their outright refusal to pass entirely through the Gates of Heaven! Cecilia is also fortunate to have a determined mother that includes her in some crazy activities for a child in a wheelchair and we love their story! Eventually a light bulb went off and the idea of posting an interview with someone on a similar path was conceived.

With that, we'd like to introduce Cecilia and her mother, Debbie as they share their story with Kellisa's Path.