Escaping with our Lives (A 1st Anniversary Story) 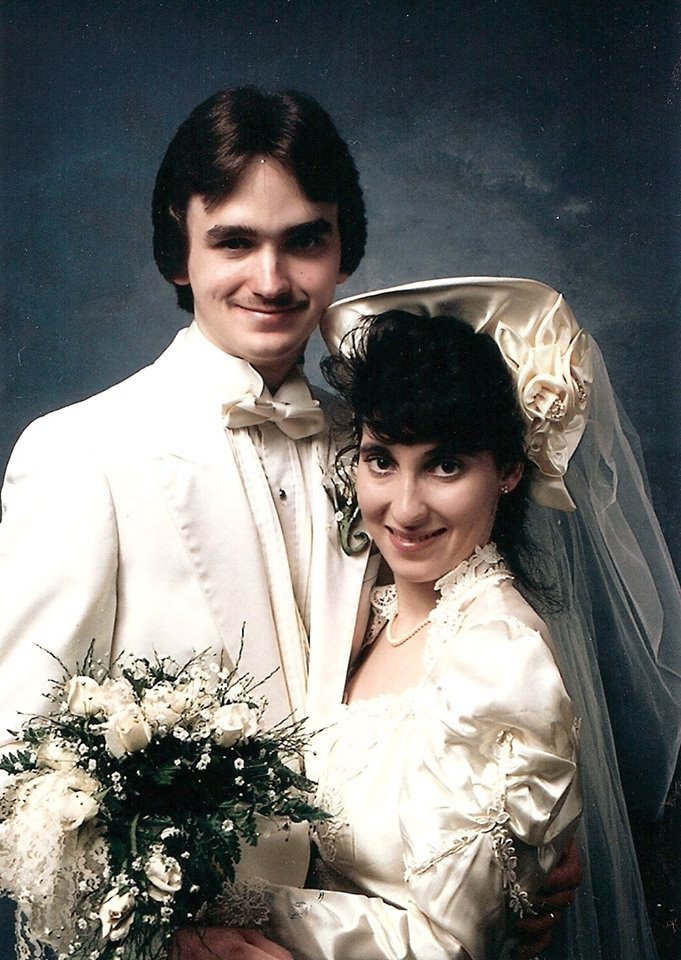 This picture was taken 26 years ago. But, this is the story of what happened (and more importantly, didn't happen) one year later:

We were young, had no money and it was March in northern Illinois. Three good reason NOT to go camping, but we did to celebrate our first anniversary. This was our first overnight trip beyond Chicagoland together. We somehow managed to buy a small tent, a stove and maybe a few other items, but we didn't have the money for sleeping bags. Instead, we threw a few blankets in the car and drove off for a happy weekend. I should mention that we had a 1977 Chevy Caprice that we had no business driving so far from home.

We drove uneventfully to Apple River Canyon State Park in NW Illinois. We were the only campers, but that didn't bother or scare us (at first). It didn't take long to set up our meager camp. We probably went on a hike before cooking a simple dinner. I remember it got dark fast and it was very cold, so we retreated to the tent. Before we could fall asleep, we heard footsteps and were scared to death. Then we heard branches breaking near the tent. Since we were the only campers, there was only one logical explanation for the noises we were hearing. We were convinced there was a murderer in the campground. We ran to the car and drove off into the night leaving behind our camping possessions.

We didn't stop until we reached Dubuque, Iowa and found a scary little motel that would accept a check in the middle of the night from two teenagers without a credit card. I know we didn't have much money in our account, probably around $150 and the hotel cost $40-$50, if I remember correctly, but we were safer than alone in the woods with a crazed killer.

The next morning, we drove back to the campsite and found everything as we left it. Still convinced a murderer was on the loose, we quickly threw all our gear into the trunk without any folding, packing or organization. We paid for two nights camping, but were happy to be leaving alive. As we left the park, we saw some beautiful hills to the north. On that whim, we drove north into Wisconsin without a plan.

We just enjoyed our drive through the rolling hills of SW Wisconsin and it was late afternoon before we knew it. The view as we crested a hill on a lonely two lane road in the middle of nowhere (near Gays Mills) was absolutely beautiful. I pulled off on the soft shoulder to take a picture. As the car came to a stop, the shoulder collapsed and the car was on it's passenger side. Snow started to fall as we climbed out of the car. The seriousness of our situation was immediate.

We couldn't remember the last car we passed and we couldn't see any farms or houses in the distance. This was long before cell phones. We were in trouble. I remember thinking that we "maybe" passed a farm a mile or two back down the road. For reasons I can't imagine, we decided that Lisa would stay with the car as I walked off into the unknown.

We managed to avoid a killer the previous night and now we were in the middle of another classic horror movie scenario. I have no idea what we were thinking. Lisa and the car quickly disappeared as I descended the first hill. I eventually saw a house in the distance and started walking across the snowy field that was the front yard.

I guess the fear of being stranded on the side of the road all night was greater than my fear of someone like Ed Gein answering the front door. I was probably 100 yards from the front porch when the door opened and a very large man exited and started walking my way with something in his hands. I couldn't tell if it was a shotgun or stick, but I knew whatever it was could easily kill me. I had no choice but to keep walking.

Before I could say anything, from about 15-20 yards, the man yelled with an authoritative voice, "what are you doing out here?"
I explained that the shoulder of the road collapsed when I pulled over and my car was on it's side. We were now close enough for me to see that he was holding a large stick of some sort. He instructed me to follow him as he turned and started to walk towards his barn. I didn't mention my young wife all alone back at the car figuring that if he killed me, Lisa would still have a chance.

Following him to his barn provided little comfort. I was always a few steps behind him. As soon as he entered the barn, he grabbed a large chain. It was hard to picture this ending without some blood. He dragged the chain towards me and again instructed me to follow him. I knew our families thought we were camping a second night at Apple River Canyon and if something terrible happened, our bodies would never be found.

Next, he handed me a shovel and told me to hop on the back of his tractor. I didn't think of the shovel as a possible weapon, I was confident he was going to make me dig a grave in the frozen ground. He drove towards our car. I was more than relived to see Lisa still at the car and alive...but for how long? It would have been even better to see a county sheriff helping Lisa.

This man pulled his tractor in front of the Chevy and immediately got down on the ground in the frozen mud to attach the chain to our car. He then drove his tractor forward and with a violent surge, the Chevy was out of the shoulder debris and a few seconds later, it was level in the middle of the road. He disconnected the chain and loaded it back on his tractor.

We offered to give him some money, but he refused. He told us that he had a daughter around our age and that he hoped if she was ever in trouble that someone would help her. We thanked him as he drove back towards his home. We drove off fortunate to be saved. Looking back, we should have headed home at this point while counting our blessings, but we drove on because I could tell by looking at the map that we were close to Minnesota and neither of us had ever been to Minnesota.

I guess this was the official start of my "state collecting". We drove over a bridge and took a few pictures (I know we have these pictures somewhere???) in the dark next to the "Welcome to Minnesota" sign. I wanted to do a U-turn and head back to somewhere in Wisconsin. Lisa insisted that we needed to stay in Minnesota longer, so I continued to drive north along the Mississippi River and even farther from Chicago. The evening's darkness was now complete. There was no way that we would be camping.

We ended up at a Holiday Inn Dome in Lacrosse, Wisconsin because they were willing to take our check. It was official, we had no money left, but we were still alive! I remember cooking a pancake breakfast the following morning at a little roadside rest area in a snowstorm. We were hungry and this was our only option. Our drive home was uneventful and when we were telling my parents that we went to Minnesota and I was proud to have a new state, my dad burst my bubble by telling me that I went with them when I was a baby to visit an army friend of his who was living in Minnesota.

Amazingly, this didn't scare Lisa off from camping (a few too many cold and wet nights would cure Lisa of camping in a tent later in life,  but those are for other stories). For my birthday later that year, Lisa gave me two giant down filled sleeping bags for our future adventures.

I was in danger of forgetting about this trip and our perceived near death encounters when I was reminded of it last week when I read a friend's post on Facebook. With everything that goes on with Kellisa and Laurel, I don't think about our "before Kellisa and Laurel" years very often and it feels like a different lifetime. In many ways, it was a different lifetime. I'm thankful to remember this story and document it before it's too late.
﻿