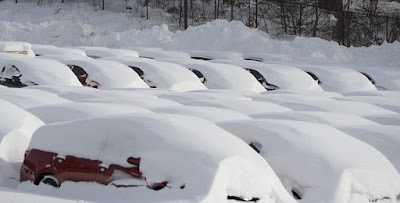 I remember it well. I flew from O'Hare early (before the snow) on the 2nd to Orlando, FL to interview for the job that would eventually move us to Florida. It was hard to enjoy the palm trees and 80 degree sunshine because I was worried about the blizzard since I left Lisa home alone and we had known she was pregnant for about 30 hours. Thankfully, Lisa was able to stay home during the blizzard.

Even though thousands of flights in and out of Chicago were cancelled, I somehow made it home on the 4th. Not thinking ahead, I had parked my little Eclipse in an outdoor lot at O'Hare. When I got off the shuttle bus, all I could see was a massive expanse of white humps. I had a general idea of where I parked, but knew it would be a monumental task to find it. I started walking through the deep snow when I noticed that people were digging down to licence plates to identify the cars. With the wind and new snow, even once cleared plates needed to be dug out again.

It took nearly 90 minutes to find my car and another 2 hours to dig it out enough by hand to be able to leave the parking spot. Did I mention the temperature outside was -20 degrees and this was before cell phones were wide spread (I didn't have one), so Lisa was sitting at home with no way of knowing what was going on.

I eventually made it home, but had to leave my car parked in the street as I had to shovel our driveway which included a pile about 6 feet high where the plows moved the street snow to the edge of the driveway.

Before I left Florida, I had a job offer to bring home to Lisa. The offer allowed me to start the job in Chicago and move to Florida shortly after the baby was born (we didn't know Lisa was carrying twins at the time). We did not hesitate to accept the offer and I can't help but think the blizzard had some influence on our decision.

Fun Fact: Almost 11 years later, Kellisa and I would find ourselves in the middle of the historic Mid-Atlantic Blizzard of 2009.