Restoring a Little Faith in Humanity 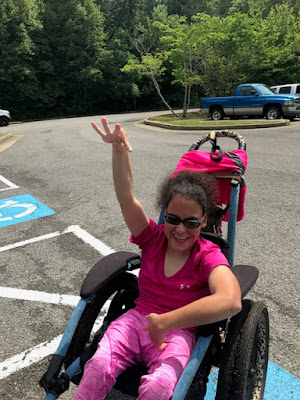 I know we are behind in updating the blog, but life has been busy. Our goal is to post like crazy all summer!

Those in the disabled world might agree that life is hard most of the time and often it seems like the world is against us. I don't like to complain, but I'm usually vocal about pointing out some of the discrimination and injustice we face on an all too regular basis.

While most people we encounter are probably neutral and at most guilty of staring a little. It is rare for individuals to go above and beyond to help strangers with disabilities. And when they do, they are usually "club members" themselves, because they "get it".

I know we like to say people act like CP, Epilepsy, Hydrocephalus, "fill in your disability" is contagious because so many turn away and actively ignore. Yes, we get people who offer help like trying to hold a door open for us. While we appreciate the gesture, these people are usually in the way more than they are helping. How are we supposed to get through the door with you standing in the door holding it? And then when we say, "We've got it" and go through the door like nothing, we usually hear, "Looks like you've done this before."

Yeah, been doing this for more than 18 years! We just carried Kellisa for the first few years of her life.

So...Kellisa and I just returned from one of our epic father-daughter trips that will provide many blog posts in the near future. We often return home without our faith in humanity restored and that's OK. That's not our motivation for travel. However, this trip was different. Within a 24 hour period, we had multiple people offer help...real help!

As I was unloading and repacking our mountain of gear in a hotel parking lot to stage for the next morning while gathering what I needed to carry up to our room all the while Kellisa was sitting in her travel wheelchair, a grandma type lady came running from across the parking lot offering to help. I'm sure we looked like a disaster all spread out over the parking lot, but we were in control and I explained that to this kind lady. She asked if I was sure and I promised her that we do this all the time. She stood there for a few minutes to make sure.

Normally, this would have been the helping highlight of a trip, but it wasn't even the best help we received that day. You see, earlier in the day we were at a national park and I wheeled Kellisa into the visitor center looking to fill my water container and grab a trail map. We didn't have time to really check out the visitor center or talk to rangers. I had our trail selected after careful research and planning.

As we were leaving, one of the rangers called us over to the counter. I hate to admit that I anticipate negative interactions, but I base this dread on past experience. Kellisa was in her Hippocampe (off-road mobility device) and I was ready for some lecture or speech on how we can't, shouldn't or maybe even how wheels aren't allowed on trails. I had my response all ready in my head when the ranger surprised me. He said, "It looks like you guys are ready to hit a trail".

"Yes sir" was my response as Kellisa giggled and blew kisses as she could tell his tone was friendly.

"It looks like you have a lot of trail experience with that thing (referring to the Hippocampe). Do you mind if I ask which trail you plan to hike?"

I answered, the "Fitness Trail Loop".

He responded, "Excellent trail. Have you hiked it before?"

I answered, "No". I was still half expecting a lecture on why we shouldn't hike this trail.

He asked if we had a direction picked and I answered, "Counter clock wise".

We drove through three hours of thunderstorms which stopped just before we arrived at the park. I knew the trail had some serious elevation changes and I was hoping it wouldn't be too muddy. It's very hard or even impossible to push 100 pounds up a steep and muddy trail.

He proceeded to explain, counter clock wise would involve a very steep ascent to the ridge top and he thought it might be a little easier if we went clockwise.

I thanked him for his recommendation and we proceeded to hike the entire loop in the way he suggested, clockwise and he was not wrong. I'm not sure we would have made it to the ridgetop going the way I originally planned. It was hard enough to descend a slippery trail.

We would fly home the next morning and have another two positive interactions. First, I was pushing Kellisa and a luggage cart that was overflowing (literally) with all our gear when a business man ran in the Nashville heat in his full suit with his own baggage to offer to help push one or the other. I politely declined and he offered, "are you sure?"

He stayed behind us, ready to help. I'm sure he was expecting our luggage pyramid to fall over (it often does), but this time it was loaded and balanced just right. When we separated at the escalators and elevator, he told us the usual, "I see you've done this before" and he went on his way.

Then as we were walking down the side hallway towards the semi-hidden elevators, I heard, "Sir".

That's when a TSA agent came running. For those faithful readers of this blog, you might recall that I've had TSA agents surround me with guns drawn and another time they called the bomb squad on me (sorry, can't remember which trip at the time of writing, so no link). So again, I was expecting the worst, but the TSA lady offered her assistance and I explained, "We've got it" and thanked her.

She said, at least let me keep the UP button pushed so the elevator door doesn't try and close on you. This was a huge help because elevator doors often close on us as we struggle to fit everything on while making hard turns in a tight area. I thanked her and wished her a great day.

I'm not sure how long it will last, but I have a little more faith in humanity today than I did two days ago!

*** I almost forgot another surprising act from the day before the ranger and parking lot lady. Sorry, we're not used to this much kindness. Kellisa and I were about 6.5 miles in a hike when it started to drizzle a little. The rain, while warm, helped cool us off a little. We were passed by an older gentleman who was out of our sight in a flash. He was wearing a poncho. I forgot to pack our ponchos before this trip.

We finished our hike where it started, at a wonderful little store- Sundog Outfitter. I wanted to buy Kellisa a souvenir for our longest hike in a long time. As the man behind the counter greeted us, he said, "You won't believe what happened 15 minutes ago. A man was just in here and he wanted to buy ponchos for the crazy guy pushing some kind of chair thing and he wanted to run them back up the trail to you".

I knew exactly who he was talking about and it warmed my heart to think this 70-something man was running down and then willing to run back up a mountain to help us. The man in the store did not sell him ponchos because as he explained to the man, "They were in here a few hours ago and the dad purchased two rain ponchos".