Sutter Health Roseville
December 2020
Lisa noticed Kellisa's left breast was swollen to 3-4 times its normal size one night while changing her shirt at bedtime. Since we help Kellisa get dressed and shower, this increase in size happened literally overnight. It was too late to do anything and ERs are too scary in the middle of a COVID-19 surge. Of course we were worried about breast cancer and I couldn't help but do some Internet searches. I found several logical explanations, I also found a rare type of beast cancer that seems to aggressively grow out of nowhere. Lisa called Kellisa's doctor first thing in the morning and Kellisa's awesome doctor saw her right away.
The doctor thought it was just fluid built up in the areas where breast milk would be stored. She was confident that a duct got pinched and closed the area. This made sense because Kellisa has a natural lean to her left side and never seems to get tired or uncomfortable in that position. In her wheelchair, her left chest area leans up against the metal arm and in bed when she props up on her left arm, her breast could become pinched between her bed and elbow.
I can't describe how relieved I was at the diagnosis and the cure was 10 days of antibiotics and warm compresses.
Several days went by and we didn't see any improvement. We talked to her doctor who became very concerned and ordered an ultrasound. I had to bring Egypt with to the ultrasound because Lisa was at work. I prepared Egypt to be left alone in the lobby area, but to my surprise, the ultrasound lady invited her back and Egypt gladly accepted.
My nerves and anxiety took a blow when the technician started asking about breast cancer in Kellisa's family. She didn't ask about pinched duct history, so while she left and we were waiting for the radiologist, I was preparing for the worst and wishing Egypt wasn't in the room with us. I wanted to control how she heard devastating news about her sister and wanted Lisa there, but there was nothing I could do but wait and deal with it.
It seemed like hours before the radiologist entered. I was hoping for a smile or something to relieve my worry as she entered, but her face was like stone. Before she explained anything, she pulled up images on the screen. I forced myself not to look during the ultrasound. I learned many years ago to resist those temptations because I don't know what I'm looking at and it will always look bad when you are fearing the worst.
As the image came up, I could see several large black spots. I feared cancer and was waiting for the diagnosis. I was also trying to keep my composure for the benefit of both Kellisa and Egypt.
"See these black areas?" the radiologist asked.
"Yes," was my trembling response.
"It's fluid built up from a pinched duct." The diagnosis we wanted to hear!
I'm pretty sure she gave me the medical term, but I was too busy having 13 tons of bricks removed from my shoulders. I started to cry because the dreaded C word wasn't part of that sentence. My relief didn't last long.
"It's a significant amount and she needs emergency surgery."
What?
We were sent home and told to wait for a call with instructions. The radiologist said it might be several days because the hospital is overloaded as they struggle with the COVID-19 surge.
Shortly after arriving home, Kellisa's doctor called and told us to go to the hospital and check-in through the main entrance. It was determined surgery was necessary as soon as possible. Besides the risk of many sick and potentially COVID positive patients in the ER, the wait just to be seen was hours long. Kellisa's awesome doctor pulled strings so Kellisa could avoid the ER and we were thankful.
Lisa rushed home from work to be with Kellisa. I had a small bag packed and 30 minutes later we were settling in a private room on the peds floor, far from the COVID-19 units. Kellisa and I had to wear masks when anyone else was in the room. It was a constant and steady flurry of activity, so the masks remained mostly on our faces.
Kellisa loved all the attention, even if it was blood draws, blood pressure tests, IV starts, etc. This was around the 10th time Kellisa left the house since mid-March and was by far the closest she was to people not named, mom, dad, and Egypt.
It wasn't until after a consultation by the surgeon that I realized how serious Kellisa's situation was inside her left breast area. Besides being filled with fluid, they were worried about truly nasty infections that were spreading to other parts of her body. The nurse checking her in noticed her left leg was red and warmer then her right. The surgeon told us they would take her to surgery as soon as she was fully admitted. I heard the surgeon call several times for updates after he left.
Everything was happening fast and Kellisa was a champ like always. Things settled down for a minute and I removed our masks. I left Kellisa's in her bed. As she heard a knock on the door, she immediately picked it up and started pointing to her face and yelling "Me". She gets it! 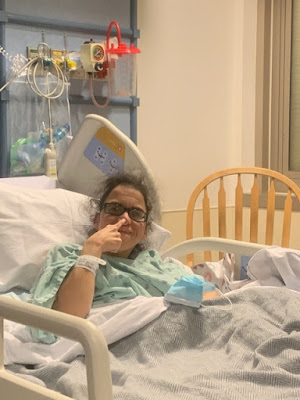 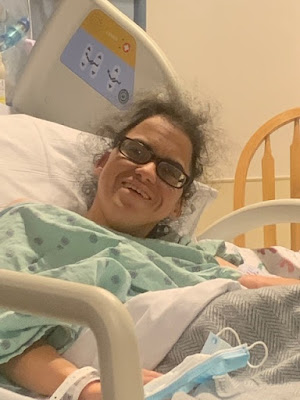 It was the surgeon and he was ready. To my surprise, he started wheeling Kellisa out of the room towards surgery. Along the way, he picked up two nurses to help transport Kellisa's bed and her IV machine. I would later learn that the transport team at the hospital was overworked due to the surge and it could take hours for them to arrive to move a patient and the surgery couldn't wait.
We were in a holding area as another nurse went through more pre-surgery checks. I talked to the anesthesiologist who was interested in Kellisa's previous surgeries and want a strict accounting of everything she ate and exactly when in the last 24 hours. I also talked to the nurse who would be there during the surgery. She did her best to explain how things happen and I tried to listen attentively, but this was Kellisa's 23rd surgery and if you could Everett and Egypt, this was the 26th time I was hearing how the process goes down. 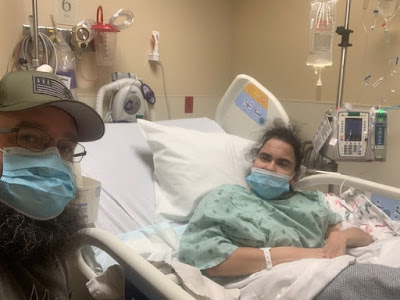 This was the first time I watched alone as my child was wheeled off to surgery. Lisa had been there with me the previous 25 times. It was difficult to suck it up to kiss Kellisa, tell her I loved her, and confidently tell her, "I'll see you soon!"
After Kellisa disappeared around a corner, I was led to a large waiting area that was empty because it was around 8pm. I asked if I could get something from a vending machine because I hadn't eaten or really even drink anything on this whirlwind day. I was devastated to hear I couldn't leave the area due to new COVID-19 restrictions.
The difficult time of waiting was made far more difficult because I was not only alone, but I was worried about how Lisa and Egypt were doing at home so far away from Kellisa even though our house is probably less than a mile away as the crow flies. I know from past surgery to not ask how long it will take and I do not watch the clock. I resist those urges at all costs for my mental well being.
I can only guess, but it was probably between 60 and 90 minutes before the surgeon found me. He didn't waste time and started by saying, "She did great and the surgery went well."
He went on to explain that he removed approximately 12 ounces of fluid and samples were taken to determine the exact type of infection so they could use the best antibiotics to attack it. He also explained we would be there for 2-3 nights and that he left the incision open to continue draining. We would go home with it open and it would close by itself.
What?
It wasn't long before I was escorted to recovery to be reunited with Kellisa. While I waited, I sent Lisa text messages with the update. Kellisa was waking up when I entered her area and she was not happy. Her looks could have killed a dozen grown men. Once the nurse was confident her vitals were stable, Kellisa was free to return to her room. Once again, they didn't want to wait for hours for transport, so two nurses wheeled Kellisa back to her room. 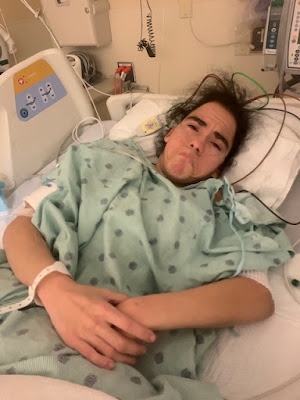 By the time we arrived back in her room, Kellisa was starting to laugh a little and almost giggle as the nurses struggled with her bed. They even bumped it a few times which was alright with Kellisa. I was waiting on the other side of her room as the nurses were doing their thing. I noticed a meal tray in the room and hoped I could eat it for dinner. I knew I was stuck in the room until at least the morning and I was struggling at this point and needed fluids more than food. 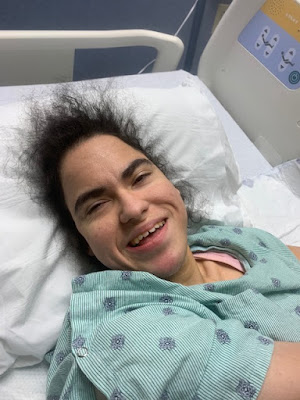 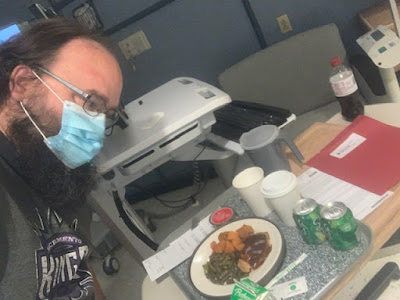 After a few minutes, the nurse told me the meal tray was for me. She explained that they wanted to take it away, but she asked them to leave it because she knew I was in a bad situation between when we arrived and how I'd been on the go the entire time while planning to spend the night. It was the best hospital food I've ever had and shortly after finishing, Kellisa and I settled in for a long night as nurses would be coming and going as they kept close watch during the first hours after surgery.
Kellisa would spend two nights in the hospital and we went home last on a Saturday night. I stayed the entire time with Kellisa and the hours passed slowly, but we enjoyed watching many movies. Kellisa liked watching Happy Feet and my favorite was Daddy's Home 2. It was just easier for Lisa to stay home with Egypt since they couldn't visit due to new hospital policies. Since Kellisa is 21, strings had to be pulled to allow me to stay. Kellisa was excited to go home and see mom and her sister. She was also excited to get a new reclining leather chair for in her room. We are hoping it will be a comfortable way for Kellisa to spend time in her room and lower the risk of pinching off her ducts. 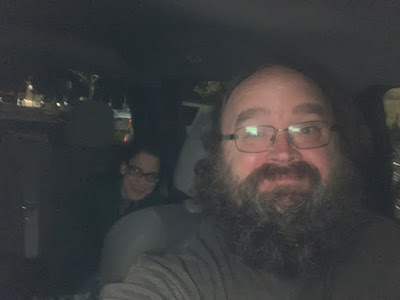 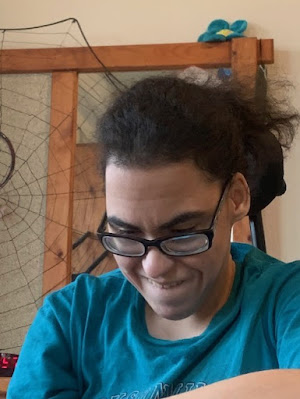 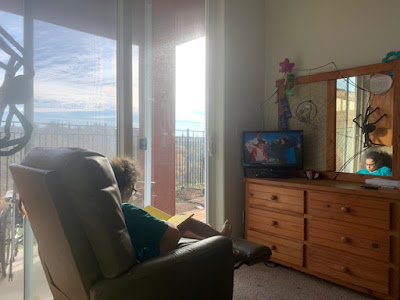