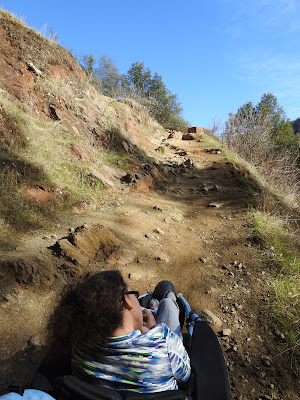 This is how Kellisa rolls into the new year while Laurel was at the park and movies with mom. It doesn't matter how much research we do on a trail in advance, we are always surprised. For the most part, the Mountain Quarry Railroad Trail is a Rails to Trail which means it is now a hiking trail on a former railroad path. This usually means wide and mostly obstacle free for Kellisa's mobility chair. Several trestles have been removed and a rough trail has been blazed to connect the rail trail around these gaps. The first couple weren't too bad to navigate, but as you can see in the picture to the right, the trail around the missing trestle over the Black Hole of Calcutta Falls is anything but accessible. But, I've jumped ahead to the crux of our first day of the year hike.

It was a beautiful and sunny afternoon when we arrived at the trailhead. Every parking spot was taken and vehicles were parked on the shoulder of the road in all directions. This trailhead didn't have any disabled parking and even if did, I'm sure those would have also been taken. We drove back and forth hoping to find a spot. After many U-turns, a spot only a few cars from the trailhead opened. This was fortunate since we had to negotiate around all the parked cars by walking (pushing) out into a lane of fast approaching cars. 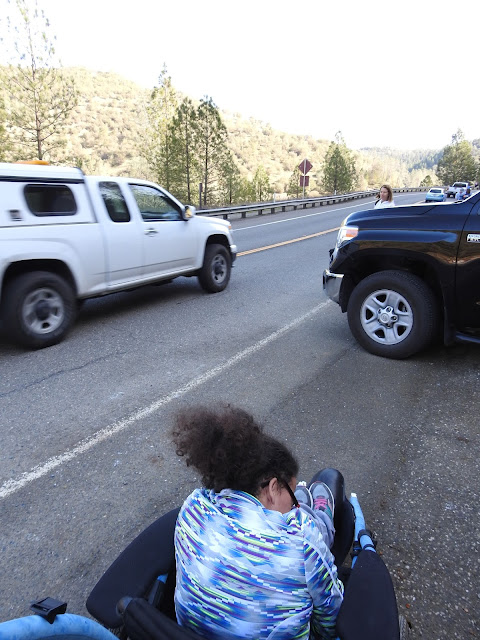 A gate was blocking the trail from the parking area, but it had an opening wide enough to push Kellisa through...not always a given! 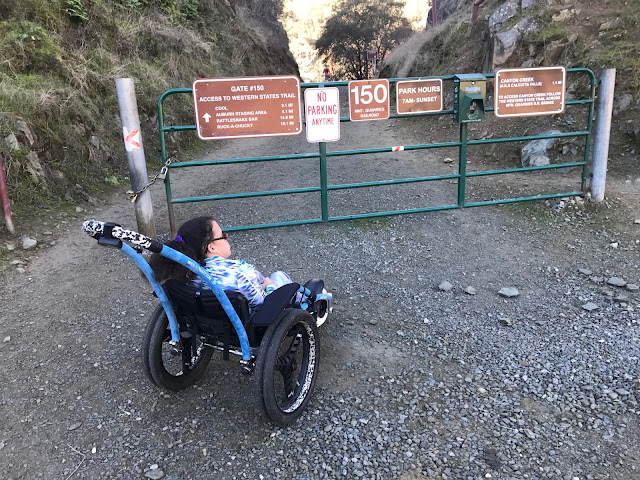 The trail started out as we expected, wide, flat, and free from barriers. The trail was crowded with people and pets coming and going. After a few minutes, we found ourselves crossing the "No Hands Bridge". Allegedly, the bridge didn't have protective rails when the path was first converted to a hiking trail and the locals gave the bridge it's name. Despite the many people on the trail, we were surprised to have the bridge to ourselves. 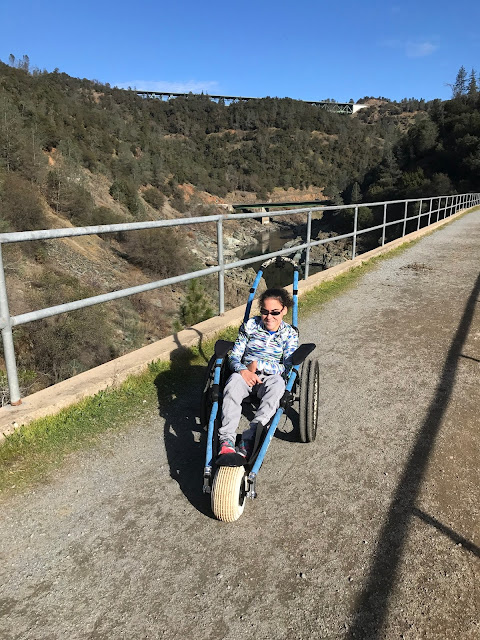 The trail was cut out high above the American River in a highly scenic section of the canyon. Shortly after crossing the bridge, the trail had  stretch with some heavy erosion that provide our first challenge of the hike. 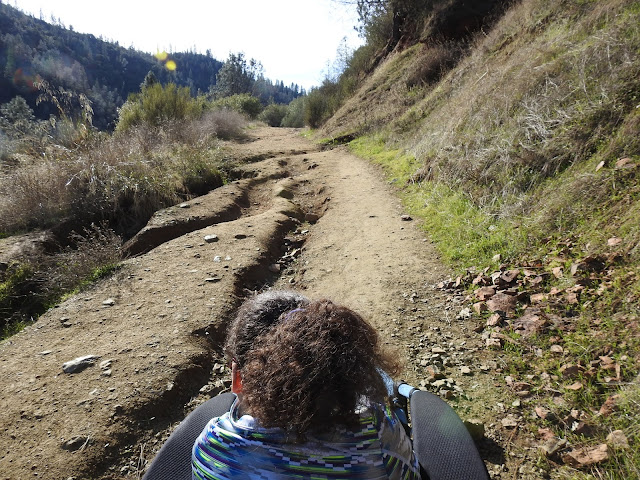 The trail continued for .78 of a mile before we reached the first missing trestle, but the detour path was easy enough to follow for a short distance. 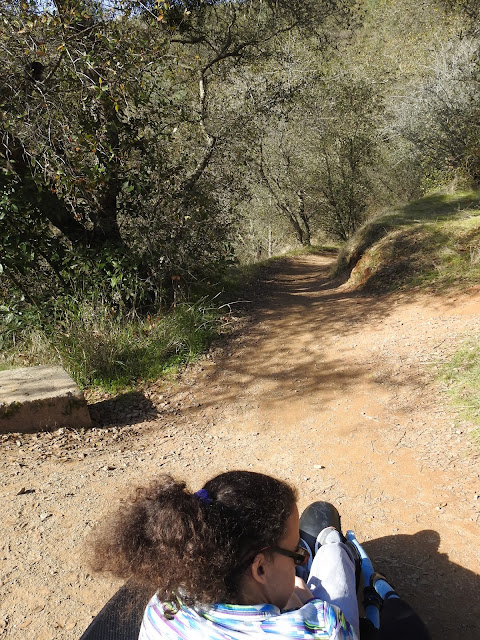 Once we returned to the abandoned trail bed, there was a steep drop off down to the river. Since the path was wide, we never felt like we were in any danger, but young children would need to be watched closely. I was careful to use the brakes on Kellisa's Hippocampe mobility chair whenever we stopped to enjoy the views and pose for pictures. 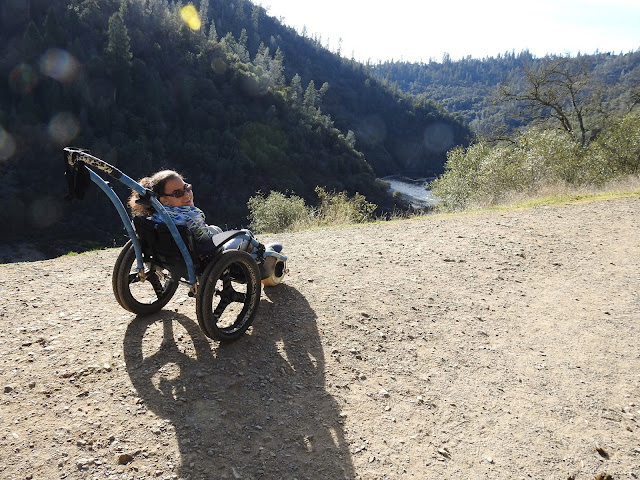 Just a few minutes late, we arrived at the next missing trestle. The path was mostly flat and just wide enough for Kellisa's chair. However, it was filled with large rocks that we needed to go over and around. The going was tough for me, but Kellisa loved every inch of our bumpy way. 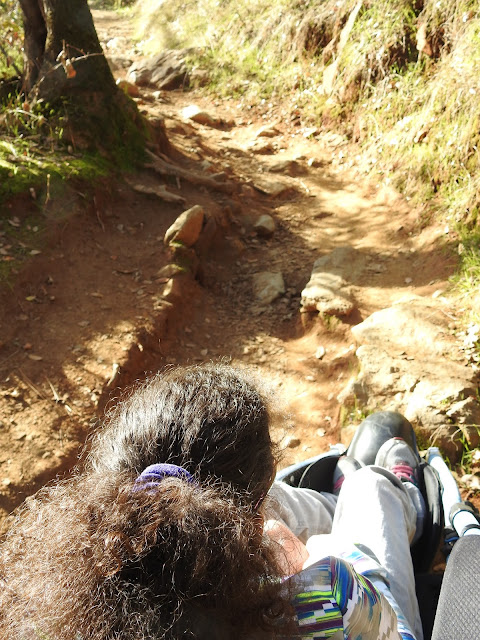 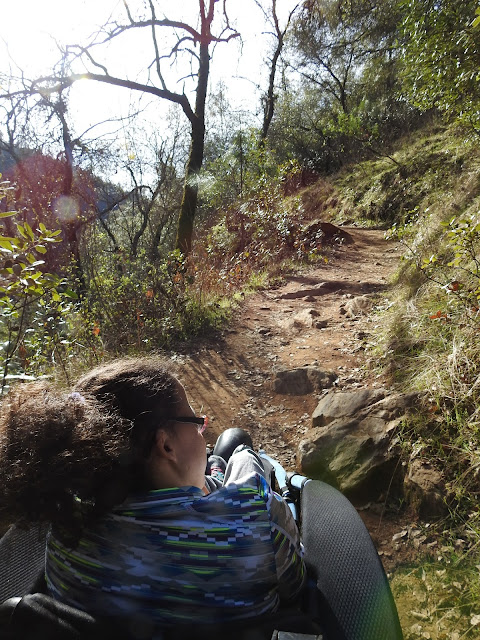 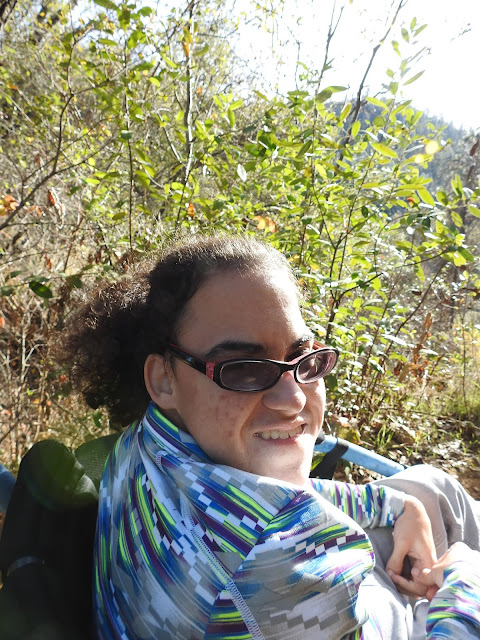 After another short rail trail section, we found ourselves looking down towards the Black Hole of Calcutta Falls. The trail descended at a sketchy angle and our route was blocked with many large rocks. Since we couldn't get a good view of the falls, we decided to tether up for safety before continuing down the trail. 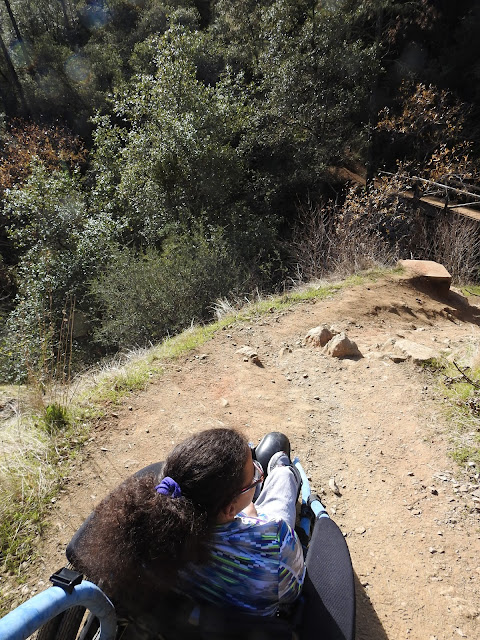 After the short, but steep descent, we were on a little bridge with a perfect view of the falls. We spent a few minutes relaxing to the sound of the falling water and taking a few pictures in between other hikers and runners who would stop to take in the waterfall. 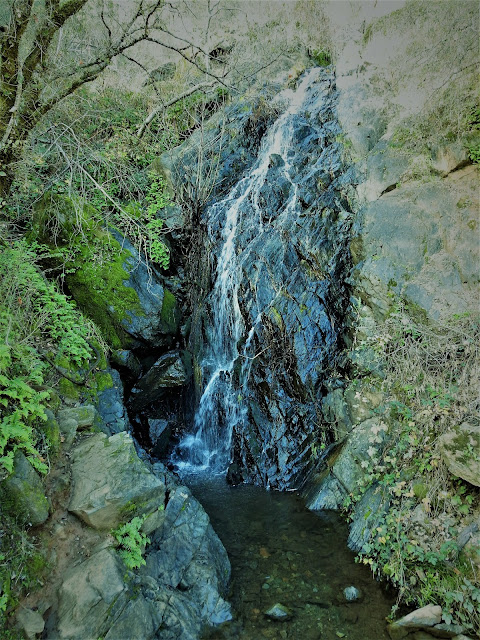 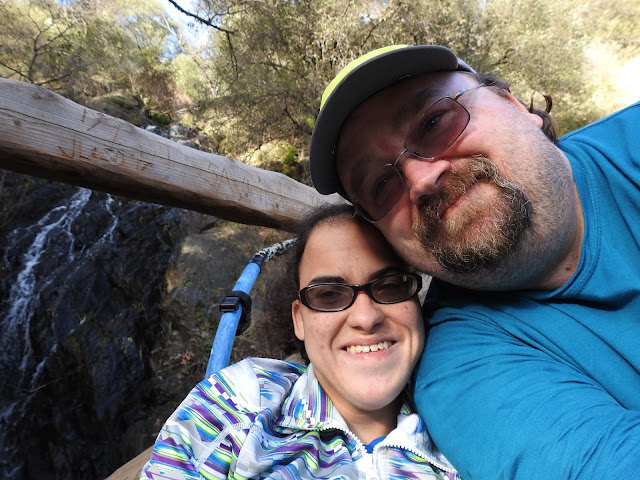 We planned to hike beyond the falls for another mile or two, but the trail after the bridge looked like more work than we wanted to do. It's never an easy decision, but we turned around before our goal. 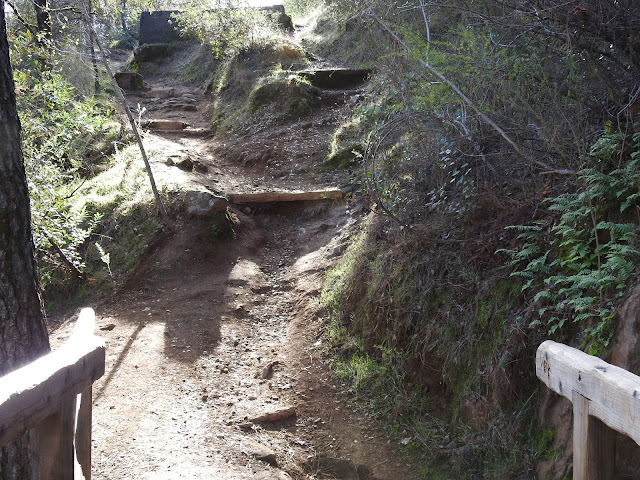 Since we decided to head back, we immediately had to climb back up the short, but now very steep and rocky trail. It was a workout for me and a giggle fest for Kellisa as she loved the bouncing u and down as we went over and around the large rocks. 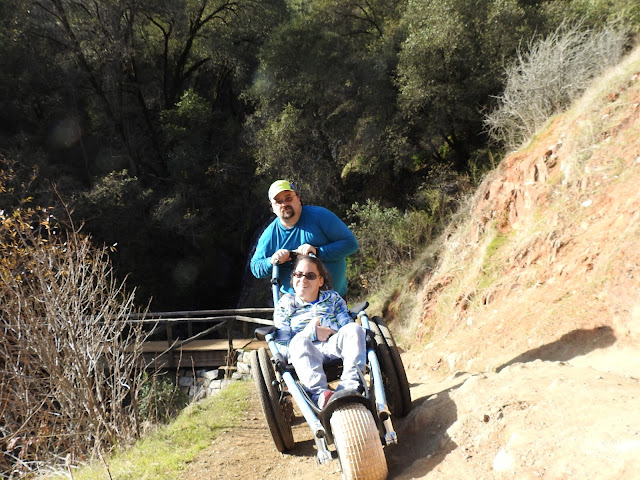 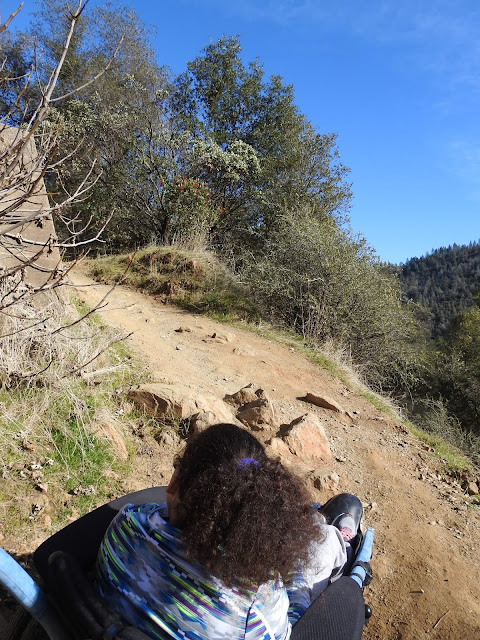 Our return portion of this out and back hike was mostly uneventful. Kellisa was excited when a horse passed us on the trail as she pointed and yelled, "me". There are times when I think about how much easier it would be if a horse was doing all the work for Kellisa out on a trail instead of me. Since Kellisa can't ride a horse alone, all the pushing falls on me...which is OK. 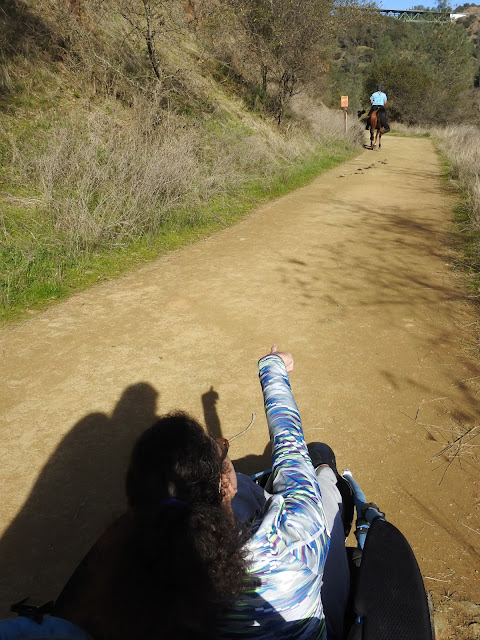 Despite giving out free bags to collect your dog's waste at the trailhead sign, we were disgusted to see and smell the many bags just left on the side of the trail near the parking lot. 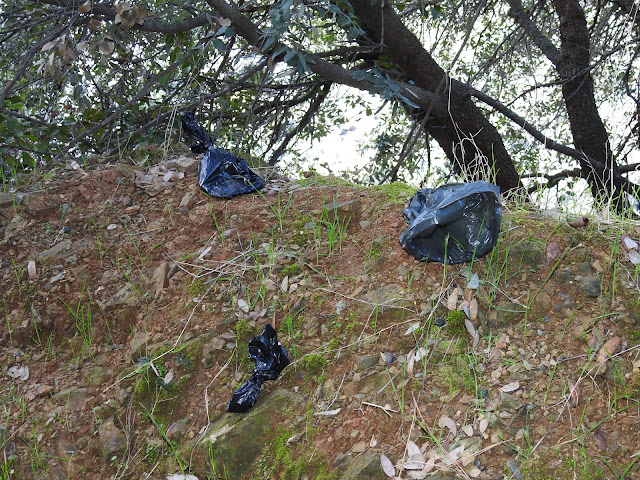 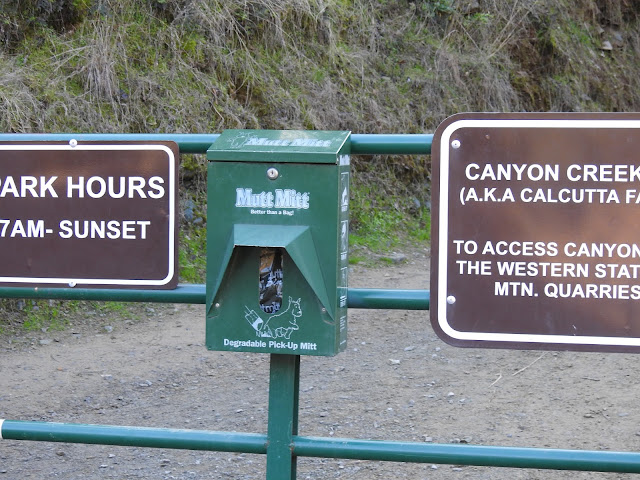 In the end, we only hiked 2.2 miles, but it was a very beautiful and satisfying journey. 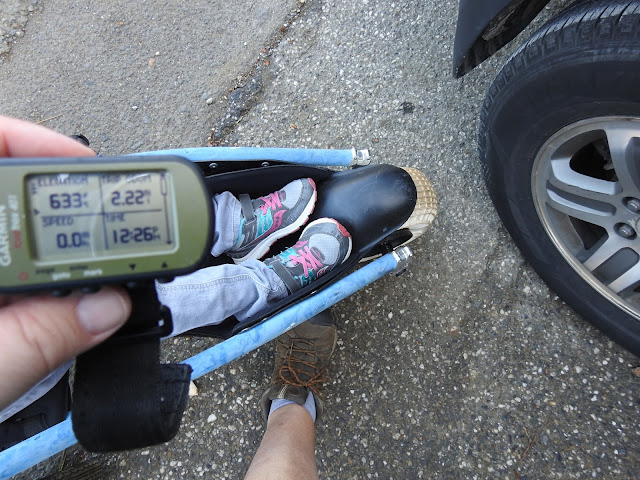 Kellisa enjoyed a well earned energy bar once we got back to our SUV. 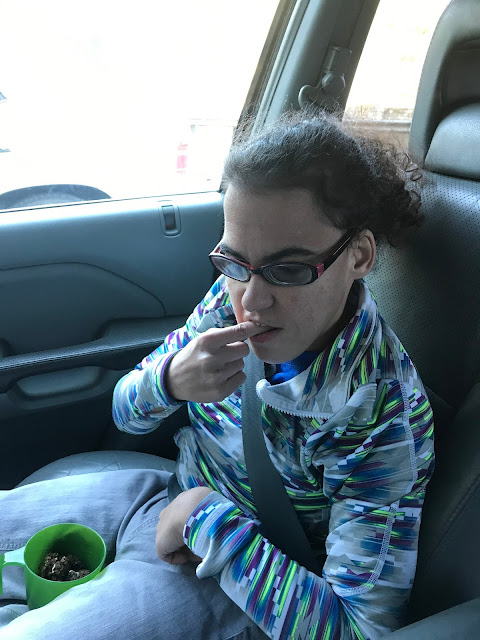