Lisa and the girls recently joined me on my business trip to Chicago to visit with Grandma. Laurel had heard food referred to as "grub" several times on this trip and she didn't understand the meaning. I'm not sure if it's a Chicago or Midwest thing, but I tried to explain it to her. On our last day, we were stopping by Grandma's one last time before catching our flight and as we drove by Taco Burrito King, Laurel asked if they had Chicago Grub. When I answered, "It looks like they would," Laurel asked if we could stop for some food.

Lisa and Kellisa weren't hungry and I wasn't about to pass up an opportunity for a promising meal, so we dropped Lisa and Kellisa off while Laurel and I went back for some grub. Right away, Laurel thought it was odd that we entered the restaurant from an alley. In fact, the idea of an alley was foreign to her and she was disturbed by the garbage and smell. Anyway, I ordered a burrito bowl (which was amazing) and Laurel got a burrito. We didn't want to leave Evie in the car while we ate, so we carried our food back to the car. That's when Laurel saw a Rat Warning Sign on a telephone pole. She lost her appetite and was convinced that her burrito had rat meat in it instead of chicken. I assured her that while rats were common in Chicago alleys, her burrito was indeed filled with chicken. Laurel believed me once she took her first bite and proceeded to devour her burrito. Even though this wasn't Laurel's first Chicago Grub meal, it was her first lesson and as her teacher, I would rate the entire meal experience A+. 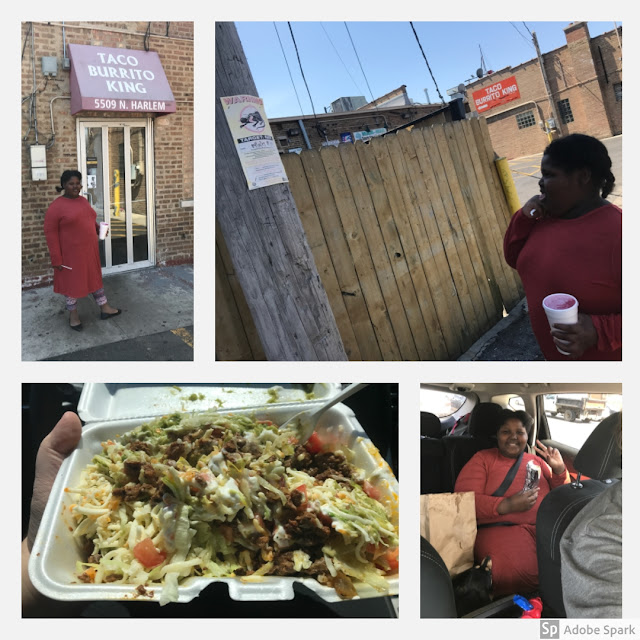