The idea for a backpacking trip on Grand Island formed when I read an article about a trail race held on Grand Island. From the pictures and race descriptions, I knew the trails would be ideal for pushing Kellisa. The highlights include hiking on top of 300 foot high sandstone cliffs with long ranging views over Lake Superior, long sandy beaches, deep North Woods and two inland lakes. Grand Island is a primitive wilderness about a 1/2 mile from the mainland of the Upper Peninsula of Michigan. The island has abundant wildlife, including a healthy black bear population.

The remoteness of the island and the black bears had me a little nervous to hike and camp alone with Kellisa. I invited our cousin Matt to join us on this adventure to the far north of America. He gladly accepted and it helped to make up for a cancelled trip we had planned for the summer. We were scheduled to do some hiking and camping in Colorado with Matt, but had to cancel because Kellisa had two surgeries over the summer followed by some complications that required weekly visits to the doctor. The doctor did not like the idea of Kellisa being far from a hospital while we were dealing with the post surgery issues. Trusting the doctor, it was an easy decision to cancel the trip. However, it was still difficult to think an entire summer would pass without an adventure.

Kellisa was finally cleared to travel and I scrambled to book a trip to Grand Island. I originally wanted to spend 4 days and 3 nights on the island. Due to Kellisa's school schedule, we had to settle for 2 half days and 1 night. Our basic philosophy was a short trip was better than no trip. 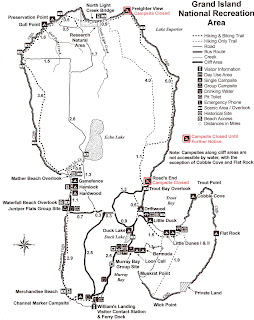 The day before our trip to the island was filled with rain and high winds. Below, Grand Island from the mainland: 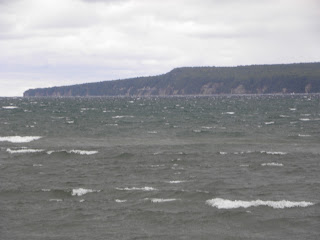 A pontoon boat ferries visitors to Grand Island and runs on a published schedule of three round trips daily for the days we would need the service. We planned on taking the noon ferry to the island. Matt and I don't wear watches and were trusting the clock in the rental car. We lost track of the fact that we rented the car in Minneapolis in the Central Time Zone and Michigan is in the Eastern Time Zone. Matt realized our error in time and we had to race to catch the ferry. As we pulled into the parking lot, we could see the ferry already departed for the island. The next ferry wasn't until 3pm. Since we already had a short trip planned for the island, the thought of losing three hours was difficult. I ran inside the office to plead our case and I was assured that the ferry would return in a few minutes and would take us to the island, but we had to be ready.

Being ready quickly is not easy with Kellisa. Especially since we camped the night before at Bay Furnace campground and didn't really organize our gear because of the rush to catch the ferry. Matt and I just started throwing gear out of the car and loading it into our backpacks. I got Kellisa's chair ready and made a last check for diapers, tube feeding supplies and her medicine. I figured we could survive 24 hours on the island as long as we had Kellisa's basic needs met. We did pretty well and I think the only thing we forgot were a few water bottles. 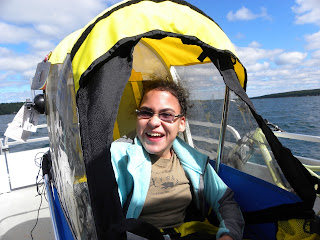 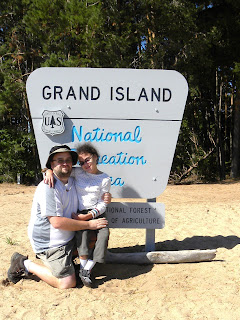 Relieved to finally be on the island, we took a few minutes to organize and settle our packs for the upcoming hike. Our goal was a campsite approximately four miles from the dock. Not a great distance, but we wanted to take some time to sight see along the trails. Also, you can't reserve the campsites, so you could find them taken upon arrival causing you to continue until you found a vacant campsite. Matt spotted an eagle as soon as we started on the trail. We were hoping that was the start of some great wildlife viewing opportunities.

I could not ask for more perfect trails (wide and free from large rocks and roots) to hike with Kellisa:﻿ 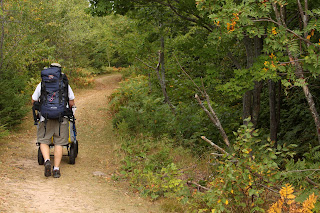 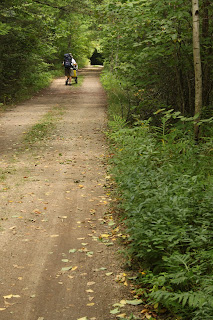 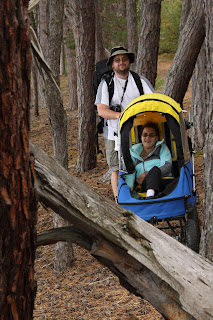 After 3.8 miles, our campsite of choice was vacant: 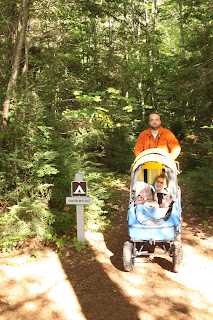 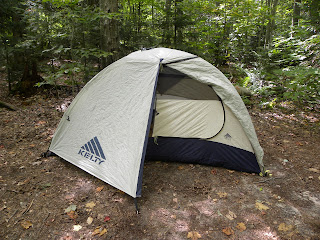 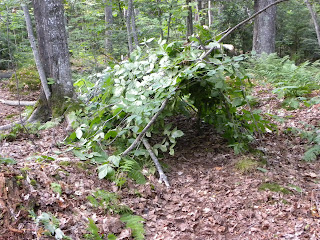 Enjoying a campfire in the early evening: 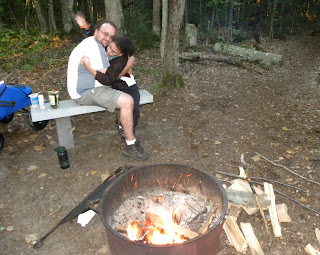 Matt returning from securing our food in the bear locker (green box just to the right of Matt's head): 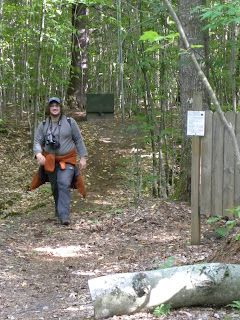 Matt emerging from his shelter: 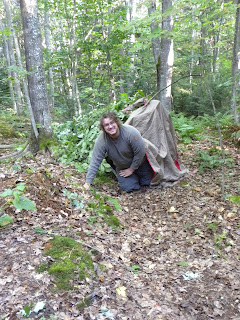 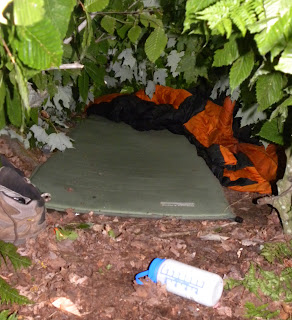 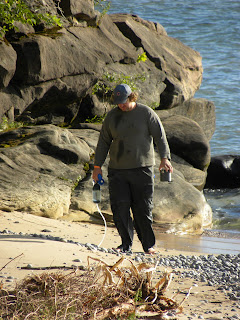 Kellisa enjoying her time at the campsite: 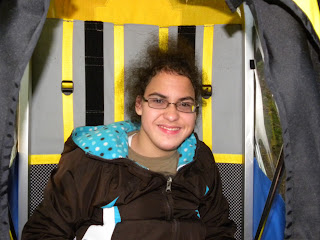 The beauty of an Ipod, Kellisa was able to listen to Hannah Montana: 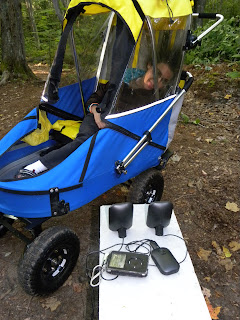 Feeding tubes and medicine in the backcountry: 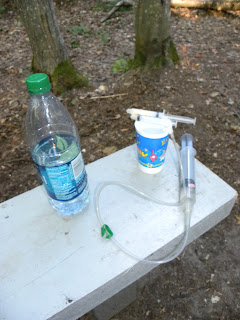 Decent facilities were provided at the campsite, at least compared to digging a hole and burying it: 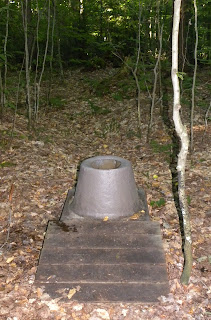 Hiking to Echo Lake after setting up our camp: 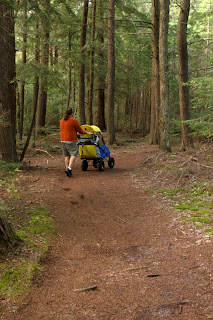 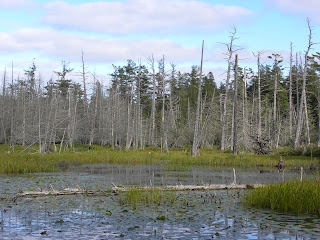 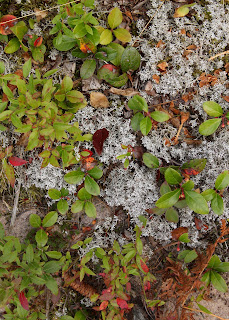 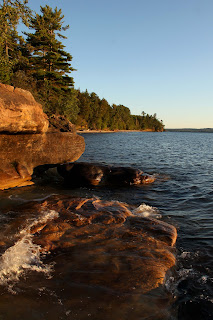 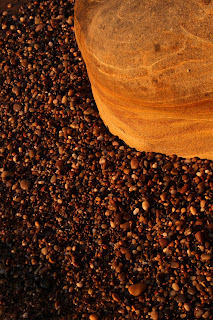 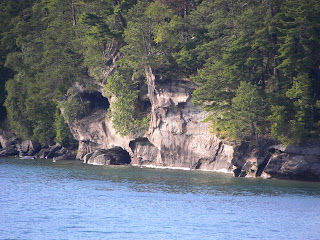 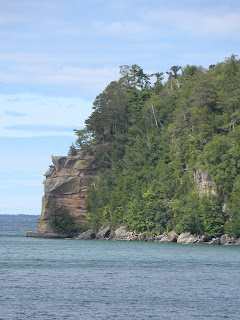 We caught the noon ferry the next day. Thankfully, it was completely accessible: 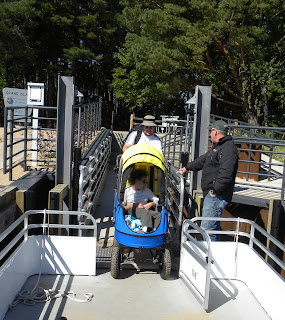 Kellisa enjoying the boat ride back to the mainland: 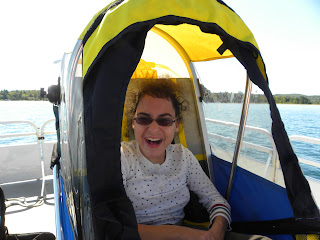 The trip was short and a complete success. Unfortunately, we did not see or hear any bears while on the island. Did they see and hear us? Probably. We would leave with a small taste of what the island has to offer and I was already thinking about a return trip before we even left the island.

Spending time with Matt allowed us to discuss adventures that would be possible to accomplish with Kellisa. I won't mention our ideas at this time, but I can say that I believe Kellisa would be the first person pushed to some of the places on our list.

I saved the best part of the trip for last. Kellisa's teacher gave me a list of words to work with Kellisa while on our trip. It was a coincidence that the list included the words: small, town, big and lake. We spent most of our time within view of one of the biggest lakes in the world and drove through countless small towns to and from the big lake. The teacher was working with Kellisa to identify these words by sight when presented to her. I took it a step further and wanted Kellisa to learn how to say the words in addition to just recognizing the words.

Kellisa learned to say all the words while on our trip. I video taped several sessions of Kellisa talking to send to school to show the teacher what Kellisa learned. Hopefully, the school will now push Kellisa because my videos clearly show her vocal potential. However, I do worry that Kellisa won't perform on our next trip due to the fear of being worked hard at school when I teach her new things. In a few days, we accomplished what would normally take several months in speech therapy, if ever. My success at getting Kellisa to say new words left me with a few questions I need to have answered: Was it the magical location of Lake Superior and the North Woods? Wanting to impress dad and Matt? Something else? All I know is that we triggered something inside Kellisa's complicated brain and we need to continue down this "out of the school" educational path.