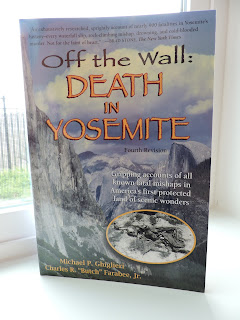 The parking lot where I purchased the snow chains earlier in the day was completely empty...and dark. It wasn't easy, clean, or dry, but I somehow managed to remove the snow chains with the help of a little flashlight I had in the car. It was a minor miracle that the light and batteries actually worked.

The parking lot was surrounded by tall pines, but looking straight up on this clear night revealed many thousands of shining stars. I opened the moon roof so everyone could stargaze for awhile.

Laurel fell asleep on our short drive back to our room. I carried Kellisa while Laurel stumbled to her bed and drifted off for the night. I gave Kellisa her medicine and formula before she joined Laurel in their bed. Lisa watched a little TV while I flipped through my book souvenir, "Off the Wall: Death in Yosemite".

The book shares stories and statistics of all the known deaths in and around Yosemite National Park. I read about falling accidents, people who got lost, BASE jumping mishaps, suicides, and finally the last chapter- murders. It was in this last chapter that I finally realized why the Cedar Lodge seemed so familiar.

Back in February of 1999, shortly after we found out Lisa was pregnant with identical twin girls, a mother and two teenage girls went missing while vacationing in Yosemite. I remember following the story as it was covered regularly in the national news. The three women were staying at the Cedar Lodge at the time of their disappearance.

Sadly, on March 18th (our 10-year anniversary), the mother's burned out rental car was found deep in the forest with two bodies in the trunk. The bodies were identified as the mother and her daughter's friend. Searchers canvased the nearby areas, but the daughter was no where to be found.

Several days later, authorities found the missing daughter's body by following the clues on a note mailed to police by the killer. Even with this note, the trail for the murderer was cold.

Months would pass and we would be consumed with Kellisa's premature birth and long stay in the NICU. Another woman went missing from Yosemite in July of 1999. Her body was quickly found and witnesses described a unique International Scout near the last known place of the victim. The killer was arrested a few days later. Turns out, he was the handyman for the Cedar Lodge and lived in room #4.

He would go on to confess to the last murder and plead guilty. Convicted, he was sentenced to life in prison without parole. He went on to plead not guilty to the first three murders, but was found guilty and sentenced to three death sentences. He continues to sit in a California prison on death row.

People often ask if I'm afraid of the dangers that can be found in the outdoors in reference to the adventures I share with Kellisa and Laurel. They are usually referring to bears and snakes, but I always answer, "I'm more afraid of people". Even though murder occurs in national parks and other wild places we visit, the statistics support that these outdoor areas are far safer than most cities in the United States.

By the time I finished reading about all this death in Yosemite, Lisa was long asleep in our bed. I wanted to drift off to my own dreamland while picturing the beauty of Yosemite and thinking about all the fun we would have the following day, our last in the park on this trip. However, all I could think about was death. At least I wasn't trying to fall asleep protected by just a tent.