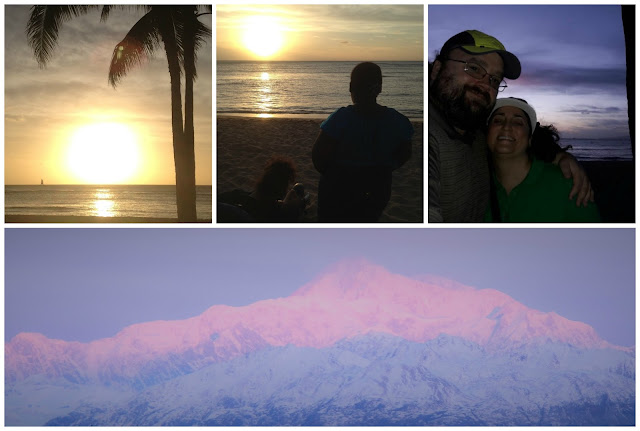 Sometimes highlights just happen, they can't be planned because they can't be imagined. This was the case when we ended our stay in Hawaii with watching the sun set (top 3 pictures) from Waikiki Beach with hundreds of other tourists. We missed the sun setting the previous four nights for various reasons and didn't want to leave the island without watching this magical event.

After the sun set, we raced to the airport for a quick dinner before boarding a red eye flight to Anchorage. With little rest, we landed in our 50th state in the dark early morning hours. We loaded the rental car in the cold darkness and started driving to Denali National Park- the location for our hike in Alaska. I drove several hours while everyone rested with varying degrees of success.

I was too excited to fall asleep while driving in complete darkness. I was busy picturing the end of our quest to hike in all 50 United States and how I couldn't think of a more epic way to finish than in winter in Alaska on a trail in Denali National Park. I was also flooded with memories of the other 49 states and the amazing times spent with my girls on the trails.

Then it happened- the sun began illuminating the upper slopes of Denali, at 20,310 feet above sea level, it's the highest peak in North America. As the sun was working it's way down the mountainside, I drove by a viewing area (lower picture) to better observe Denali. After a quick u-turn, I pulled into the parking area. We were the only car in the lot that was covered by thick ice hidden under fresh snow. Everyone woke up to marvel at the beauty as I jumped out to snap a few pictures.

It was and still is hard to comprehend that we watched the sunset from a beach in 80F weather and a mere 11 hours later, we were watching it rise 3,000 miles away in -20F weather. This might surprise some, but not me. If we could only go back to Alaska or Hawaii...we would all pick another trip to Alaska!

I'm not sure EPIC is a big enough word to describe our experience.