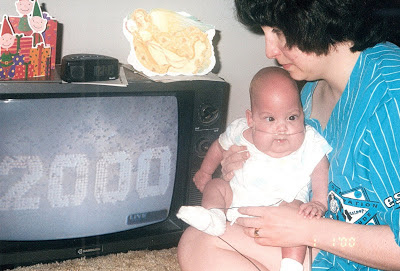 This is an interesting post to make our top 10 most popular list. It's my recap of 2000 and 2001. A lot of things happened in those years when Kellisa was a very medically fragile baby. In a lot of ways, looking back, it was a simpler and easier time even though we had zero idea while we were living it. In other regards, it was some of the most difficult days.

I named the post, "84 Cents" because Lisa and I had to pay out of pocket for one of Kellisa's emergency brain surgeries because the insurance company didn't agree with the neurosurgeon that Kellisa's life was on the line. We decided to trust the doctor and it took literally everything we had and more than can be imagined. We had no money, gas, or food, but Kellisa was alive and fighting and we owed it to her to give her every chance.

Roughly two decades have passed and I don't think we'd change a single thing from these years. It would be easy to say, we wish insurance would have paid for the brain surgery (and resulting hospital stay and follow-up appointments), but then I'm not sure we would have ended up in Jacksonville where we spent 16 years. It's where Kellisa grew up and set the foundation for who she is today. We met many amazing people during our time in Jax. Lastly, if we didn't end up in Duval, it's highly unlikely we would have ended up with Laurel.

So...yeah...it all happened for a reason!

Email ThisBlogThis!Share to TwitterShare to FacebookShare to Pinterest
Labels: Top 10 Most Popular Posts