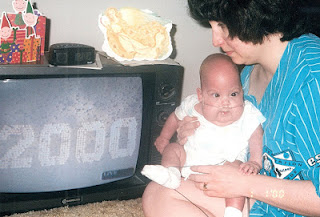 Kellisa was up at midnight so she could welcome the new year, 2000 into her life since it was a major accomplishment and reason to celebrate.

Later in the day, we went to Blue Springs State Park about an hour from our home. We saw a sign that swimming was allowed in the spring, but there was also a warning about the possibility of alligators in the water. Florida was still very new to us and the idea to take a plunge on New Year's Day into 72 degree water was appealing to me.

I handed Kellisa (in a chest baby carrier) and her oxygen cylinder to Lisa who followed along on a trail as I swam parallel to them in the spring run. The water felt amazing on a day with temperatures in the 80s. This was Kellisa's first official hike. Unfortunately, I don't think we took any pictures of this historic day. 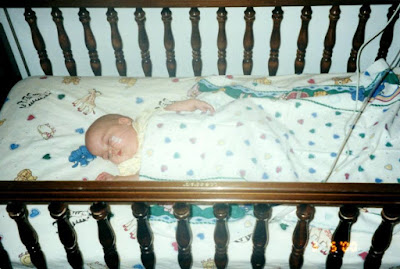 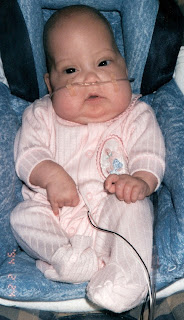 We always knew Kellisa was delayed and hoped she would catch up to her peers. The doctors would often say, “She can be anywhere from mildly to significantly disabled.”  We just enjoyed Kellisa at her own speed. She always needed to be held and cuddled. I worked a few minutes from home and would come home for lunch and just hold Kellisa for the hour. It never got old.

Kellisa started wearing glasses and was placed in leg braces. Her sensitivity to noise made daily life difficult. Lisa and I learned to walk on eggshells in the house. We couldn't even turn on the kitchen faucet without it frightening Kellisa to the point of uncontrolled crying that would often last 30-45 minutes. We would hold her, rock her, talk gently to her, nothing would make her feel safe after an unexpected noise. We had a local restaurant that we used as a gauge to see if Kellisa was improving. At first, we would open the door and the noise would set Kellisa off crying. After a couple of months, we could make it to the hostess. The next step was actually being seated, but leaving before we ordered. The closest we ever came to eating at this restaurant was placing an order before I had to take Kellisa to the quiet of our car while we waited for Lisa to bring our food. We didn't eat at a restaurant until after Kellisa's 2nd birthday.

While holding Kellisa one evening, she had a seizure that lasted 45 minutes requiring a 911 call. The responders left with Kellisa and Lisa in the ambulance. I gathered a few things and rushed to the hospital. When I arrived, they had no information about Kellisa. She never arrived. This led to some scary moments for me and this was before we had cell phones, so there was no way for Lisa and I to get in contact with each other.

The paramedics determined in the back of the ambulance that Kellisa needed to be transported to the regional hospital instead of the smaller local hospital. Thankfully, they sent word back to the original hospital where someone tracked me down to tell me that Kellisa was actually at a different hospital.

Kellisa’s shunt needed to be replaced in May of both years. The shunt surgery in 2001 was denied by insurance because, “At this time it’s not absolutely medically necessary”. We didn’t have time to fight the insurance company because we knew a failed shunt would lead to more permanent brain damage and possible death. If the neurosurgeon said Kellisa needed emergency shunt surgery the following morning, we trusted his opinion over someone at the insurance company crunching numbers.

We needed to protect what precious brain matter Kellisa had, so we tapped into everything we had and charged her brain surgery to credit cards. When Kellisa was discharged from the hospital 69 miles from our house, we had the gas in the car, old food in the refrigerator, undesirable groceries in the pantry, and exactly 84 cents between us. The surgery took everything we had, but it was a success.

This was our financial low point, but not having money made grocery shopping easy. My weekly food consisted of 20 frozen cheese burritos and a 10 pack of 3 Musketeers bars while Lisa got a loaf of bread and the cheapest jar of peanut butter. My only food decisions were, which day to have only two burritos and which three days could I have two candy bars. I want to say our weekly food allowance was $12. I ate so many burritos and 3 Musketeers in the following months that I won't touch either of those items to this day. And since we couldn't afford gas, I rode my bike to and from work. I even rode it on the side of highway a few times when I had to travel 20+ miles each way for something in Daytona Beach.


We appealed the insurance company's decision to deny brain surgery and it was eventually permanently denied. We were living in paradise, but it was obvious that I needed a new job with different insurance. Plus, the 138 mile round trip drive to the doctors and children's hospital in Orlando was getting old. We (mostly Lisa and Kellisa) were making the drive 3 and 4 times most weeks because Kellisa was being followed very closely by many specialists. When Kellisa had overnight stays, Lisa would sleep in the hospital room and I would squeeze into the back seat of a two door hatchback for a few hours (only 1 parent was allowed to spend the night in the room). We wanted to stay in Florida, but needed to live closer to a children’s hospital. I changed jobs and we moved from Edgewater to Jacksonville in August 2001.
at May 02, 2017

Email ThisBlogThis!Share to TwitterShare to FacebookShare to Pinterest
Labels: 2000 & 2001, The First 18 Years