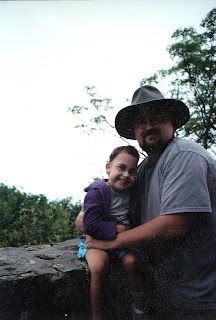 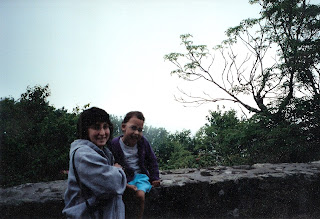 Brasstown Bald- we arrived just a few minutes before the summit area closed. Normally, the summit is reached by gaining 400 feet along a 1/2 mile path. The park does provide a shuttle to those with disabilities. No one was around and knowing this was our chance to reach the actual highpoint on this trip, I decided to drive up the road reserved for the shuttle. After I parked, I hung Kellisa's disabled parking card from the mirror in the hopes of not getting locked in for the night and for good measure in case of a ranger encounter.

I carried Kellisa to the highpoint which wasn't far and we took the pictures above before quickly returning to the van where a park ranger was waiting. She was not happy as she lectured us on the park rules we were violating. I don't think she believed Kellisa was really disabled because I left her wheelchair in the van. With a strong warning, we left following the success of Kellisa reaching her first state Highpoint.

Before stopping at Brasstown Bald, we stopped at Amicalola Falls State Park. For most people, the 729 foot cascades (highest in the Southeast) that give the park it's name is the main attraction. Also, Appalachian Trail (AT) Thru-Hikers know this park because of the connecting trail to the southern most point of the AT. The reason for our visit was the West Ridge Falls Access Falls Trail that is wheelchair accessible. It would be our first hike while pushing Kellisa, even if it was an easy trail that was accessible. We were outside and would get to view a beautiful waterfall. 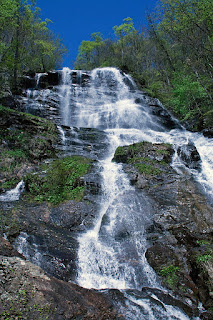 I wasn't satisfied after the short accessible trail. While Kellisa had an awesome wheelchair at the time, it was anything but trail worthy. My passion for adventure had been awakened after a 5+ year hibernation. I decided to try a "real" trail with Kellisa. It would be steep, muddy, rocky, scary and fun! Looking back, it was one of the dumbest things I've ever done with Kellisa, but at the same time one of the most important. With people looking at us like I was crazy, it took everything I had to get Kellisa up the trail to a better viewpoint of the falls. This was the day I realized I could share my love of the outdoors with Kellisa.

On our way home from Brasstown Bald, we stopped for a short visit at Tallulah Gorge State Park. The gorge is nearly 2 miles long and 800 feet deep. We were pleasantly surprised to find a paved trail to several outlooks for easy viewing of the gorge. 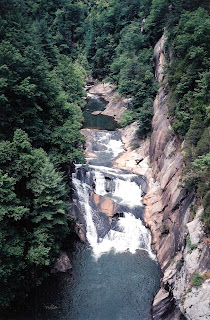 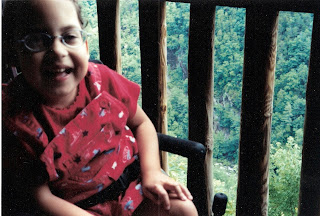 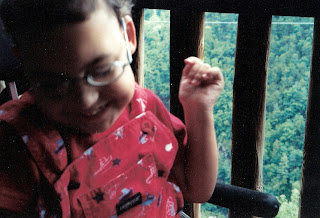 Kellisa had just turned five the week before this trip and had already endured 13 operations, including 7 brain surgeries. The 14th (feeding tube) was scheduled less than a week after we would return from this mini-vacation. Needless to say, we didn't have the time or opportunity to pursue outdoor adventures.

The previous year had been a particularly rough year for Kellisa. Only her first year of life could rival her medical issues suffered during 2003. Kellisa started having a high fever in early March and was suffering from dehydration and lethargy. We were seeing several doctors every week and Kellisa was admitted into the hospital on the 12th for a three day stay. The doctors were struggling to determine a definite cause for Kellisa's illness. The fever would end up lasting over a month. The doctors thought it was just a persistent cold/flu since it was the right season and Kellisa didn't have a healthy baseline to begin with. It was our strong belief that something was wrong with Kellisa's shunt, mainly because it had been replaced four times since the original surgery and we knew the signs. After a CAT scan, we were told that the shunt was functioning properly.

Because of our persistence, the doctors were testing and checking all the possible causes off their lists when they came to HIV/AIDS. Normally, we wouldn't have been concerned, but Kellisa had received several blood transfusions to keep her alive while in the Neonatal Intensive Care Unit.  Kellisa was near death and no one could figure out why and the doctors were testing for HIV/AIDS.

While Kellisa lay in her hospital bed almost lifeless, Lisa was flicking through the channels on the TV. As Lisa paused on the Disney Channel, Kellisa immediately showed some life as she perked up a little. A show called The Wiggles was on. We had never heard of The Wiggles, but this was the first signs of life from Kellisa in several weeks. From this moment on, Kellisa would get excited every time The Wiggles came on and we started purchasing their DVDs. We sincerely believe that The Wiggles played a significant role in saving Kellisa's life back in 2003. At the very least, they gave her enjoyment in her darkest times. For this, we will forever be indebted to The Wiggles!

Until now, the school picture below has never been shared and her sickly image is just as disturbing today as it was seven years ago. The picture was taken on March 27, 2003: 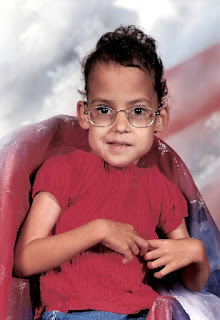 Fortunately, the HIV/AIDS testing came back negative. However, Kellisa was still fighting to survive on April 9th when we took her back to the hospital. We refused to leave until they tapped her shunt. We were told that it was impossible for the shunt to be infected because it had been in place for two years and the CAT scan looked perfect. The neurosurgeon eventually gave in and tapped the shunt. Satisfied, we left for home. We already had a message from the hospital with the results when we arrived at home less than an hour later. The shunt was grossly infected and they were scheduling the surgery for the following morning.﻿

For many reasons, including the fact that Kellisa's neurosurgeon was close to retirement and she had been sick for so long without proper diagnosis, we were not comfortable with having the surgery performed in Jacksonville. Before we moved to Jacksonville, Kellisa had a great neurosurgeon in Orlando, FL. We decided to drive down to Orlando and have Kellisa admitted to Arnold Palmer Hospital. At first, the neurosurgeon was reluctant to accept Kellisa out of professional courtesy to the Jacksonville doctor. We pleaded our case and he eventually decided to review Kellisa's case.

We were asleep in Kellisa's hospital room when the doctor woke us up at 4:30am. He had been up all night performing emergency surgeries before he could review Kellisa's case. Knowing that he placed the shunt back in May 2001 and the CAT scan looked perfect, he believed that it was so unlikely that the shunt was infected that he doubted the test results. He wanted to tap the shunt himself which he proceeded to do in the hospital room. The infection was confirmed and they were taking Kellisa at 6:30am for her emergency brain surgery.

Kellisa's shunt and tubing had to be completely removed from her body before a temporary shunt could be placed. This shunt would be external and the excess Cerebrospinal Fluid would be collected outside the body and frequently tested for infection. After the surgery, Kellisa was on strong antibiotics to kill the infection. We were advised that it could take a week or even a month before the infection was completely gone from her body.

Kellisa would remain in the hospital until a permanent shunt could be placed. But this surgery couldn't happen until the infection was gone. It took only seven days to wipe out the infection that almost killed her. Kellisa would have another surgery on April 18th to remove the temporary shunt and replace it with a permanent programmable shunt.

This surgery would be one of the hardest on us as parents even though Kellisa was past the worst of her sickness and it was our 10th surgery with Kellisa. We were told that the surgery would last about three hours. Lisa and I had a normal routine that we followed after every operation. Once Kellisa was wheeled away towards the operating room, we would go to the hospital cafeteria and have a meal while discussing something positive before returning to the waiting room where we would let the nerves settle in as we tried to read a book or magazine. The nurse called about an hour in the surgery to give us an update that everything was going as planned. Two hours went by and then three, three and a half and still nothing. We were out of our minds with nervousness as four hours passed without an update. The volunteer lady at the desk couldn't help us.

Finally, at four and a half hours, another neurosurgeon in the same practice came out to give us an update. He apologized for the delay and told us that everything went OK and Kellisa was waiting for us in recovery. He would go on to explain that three kids were involved in a serious car accident and all three needed emergency brain surgeries. The kids were admitted while Kellisa was in surgery and the doctors and nurses had to immediately attend to the other kids following Kellisa's operation. We were relieved and understood why we were kept waiting. I couldn't help but have thoughts of losing Kellisa during the wait and those thoughts still haunt me today.

Kellisa came out of the surgery and was back to her usual self in no time. We will forever be indebted to Dr. Pattisapu for saving Kellisa. Because it was a new shunt, we still had to worry about the body rejecting the hardware and tubes. There was also the possibility of another shunt infection during the first year following the placement. The shunt would last until October 2005.
﻿