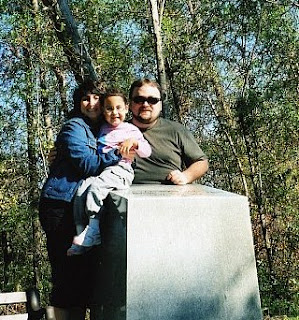 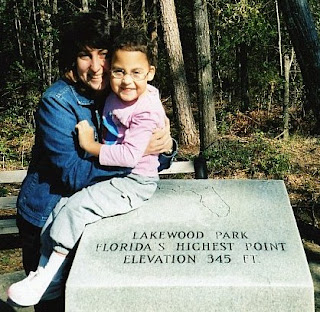 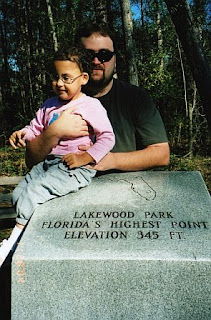 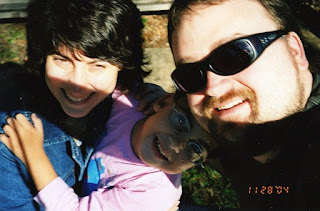 We stopped at Lakewood Park, home to Florida's Highpoint- Britton Hill, on our drive home from visiting the Buckingham's for a Thanksgiving feast in Texas. It was about a 2 1/2 hour detour for Kellisa to reach her second state highpoint. It's probably the easiest of the 50 highpoints to reach with a drive up and short paved path to the actual top of Florida. I just carried Kellisa to the granite marker for the customary "summit" photos above.

In the the 18 months before visiting Britton Hill, Kellisa continued down her rough medical path following her shunt infection of Spring 2003. Unable to drink and eat enough to stay adequately hydrated and maintain a healthy weight, Kellisa had a g-tube surgically placed in her stomach in June 2003. This would allow fluids, including prescription formula and medicine, to be directly inserted into her stomach. It's suppose to be an easy, routine surgery with only a 1% chance of complications. Never one to venture beyond the 1%, Kellisa's body was rejecting the g-tube by pushing it our of her stomach. Following a month of "nursing" the g-tube, Kellisa had a follow-up surgery to remove and replace the original  g-tube with another. Again, true to her nature, Kellisa continued down the 1% path after the second surgery. She suffered from granulation tissue growing out of the hole in her stomach. Kellisa had to visit the doctor to have the granulation tissue burned off several times a month. It finally got to the point where the doctor sent us home with silver nitrate to burn the granulation tissue ourselves as necessary to avoid the constant doctor appointments. Kellisa would need to be held down by one person while the other burned the tissue. After many months, the granulation tissue eventually stopped growing and Kellisa was beyond the g-tube surgeries.

In September 2003, Kellisa had Bilateral VDRO surgery. This would be her 13th surgery to date and by far the most painful and difficult to manage as parents. Because Kellisa wasn't bearing consistent weight on her legs, her hip socket did not grow around the ball of her hip. This eventually caused constant pain because her hips were dislocated and were moving freely. The surgery consisted of placing hardware in her leg bones and removing a section of bone in both legs to help force the hips into place with the hope of the socket developing to the point were the hips wouldn't be dislocated.

Kellisa was in constant pain and discomfort for 6 weeks despite being on strong pain killers that were dispensed every 4 hours. To make things worse, Kellisa suffered from leg spasms which would intensify the pain. We set up a mattress in front of the television in our living room as a place for Kellisa to attempt to sleep during the night. She would moan and cry most of the night from the pain. We thought the TV might help her fall asleep and if not, she could watch the Disney Channel. We took turns sleeping on the couch above Kellisa to be in position to comfort her when she would cry out. This would also allow the other parent to try and get a decent night of sleep. However, her cries would awaken us no matter where we slept in the house.

Kellisa was diagnosed with acid reflux in January 2004. Add another daily medication to her growing pill box. Everything would be quiet for several months before Kellisa had another surgery, this time a 2 for 1: Tonsillectomy and Adenoidectomy because of sleep apnea in August 2004. The surgeon would remove the tonsils and adenoids with a laser. To every one's amazement, one of Kellisa's tonsils would grow back even bigger than they were originally. The doctors have said that this is as close to impossible as you can get. We've even had doctors ask "what is that on her throat?". Some have even had to look for themselves because they've never heard of tonsils growing back after laser surgery.