I've completed the last three (2009-2011) Bataan Memorial Death Marches. Every year, I set two goals for myself. First, I wanted to finish no matter what. Second, I set a target finish time in my mind. I did not carry a watch or time myself in any way, I just knew how prepared I was each year and hoped for the best. The march is 26. 2 miles across the rolling hills of the New Mexico desert. Depending on who you talk to, there are two cruxes on the course. There's a mountain to traverse and approximately 3/4 of a mile of ankle deep sand after mile 21, fondly known as the "sand pit".

Elevation of the course:

The march has a strict no strollers policy. I wrote to the race director and pleaded my case. I explained that Kellisa was a disabled 12 year old girl who can't walk, weighs 80 pounds and is a patriotic supporter of our troops. I described the Advanced Mobility Independence Push Chair that Kellisa would ride in as I pushed her along the course. To further my case, I mentioned that I am a three time completer, so I know what I'm getting us into as far as understanding the difficulty of the course. I also promised to be 100% self reliant. They had a few questions and warnings, but on January 20, 2012, we received special permission to participate in the 2012 march. 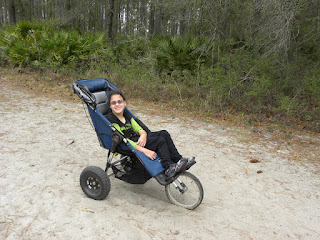 Kellisa traveled to White Sands Missile Range to support my march in both 2009 and 2011 since it fell on one of her spring break weekends. Luckily, the 2012 march also falls during her spring break.

Lisa and Kellisa in the early morning cold before the start of the 2009 march: 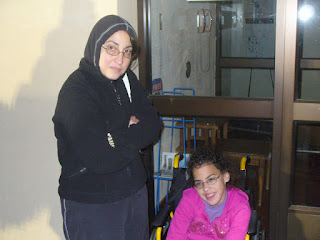 Kellisa looking for me at the finish line: 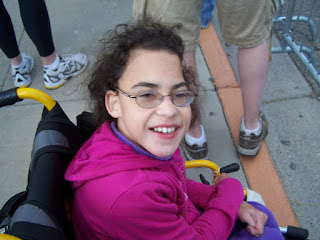 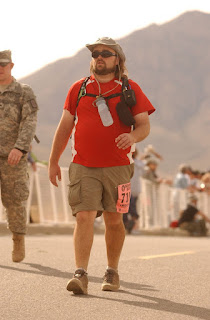 I didn't want to get up, so Lisa and Kellisa joined me on the ground: 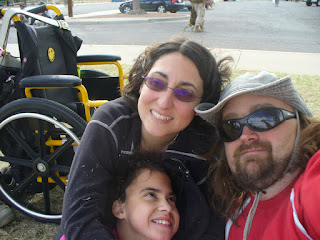 Participating in my first Bataan Memorial Death March was a life changing experience and I made a vow to myself to participate every year that I was able. I'm excited to take the march experience to the next level and share the course with Kellisa. I don't know if 10 hours is realistic considering I will have to stop and help Kellisa, including giving her water through the g-tube. Hopefully we will finish and claim to be the first "pushiking" team to complete the Bataan Memorial Death March.


Maybe we will inspire a team of soldiers to push a fellow veteran that lost a leg or two and can't complete the march under their own power???