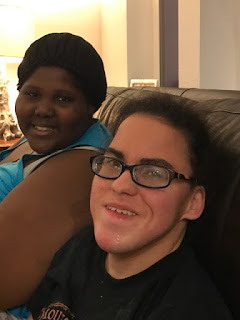 We survived. It felt like a regular Saturday with everyone home and doing there things. Kellisa spent the day watching music videos in her room, Laurel playing her video games, and Lisa keeping the family and house functioning. I'm not sure what I did, but I remember walking the dog, taking boxes to recycling, helping Kellisa, reading a book, spending time on my computer, and I even went to the grocery store.

I had set a goal to get outside at least once a day while the kids were home from school. I want us to take the time to see the beauty around us and breathe some fresh air. Sadly, we didn't get outside as a family. It rained all day, which isn't a plan buster by itself, but it was cold (50F) and windy all day, so we stayed inside.

Lisa made three amazing meals which makes being trapped in the house a million times easier.


After dinner, the girls wanted some sister time. Yes, they can drive each other nuts at times, but at the end of the day they love each other. They sat together on the couch for over an hour and the giggle far outnumbered the little pushes or feet in the face shenanigans of sisters.

After the girls went to bed, I decided to venture out to the grocery store. I wanted to grab a few items, but mostly wanted to see the aftermath of Saturday stockpiling. We don't have supplies to survive years or even months, but I think we'll be OK for a few weeks.

We lived through 16 years of hurricane season while we were in Jacksonville, FL and I think that taught us an awareness to be ready to suffer through a few weeks of chaos. First with Kellisa and then with Laurel, we needed to be sure we could weather the storm and we just made it part of life to have some extras around. We carried this habit with us when we moved to California. Lisa makes sure we have an extra supply of toilet paper and soap. Not hoarder quantities, but enough so we never run out. We also keep some easy food around for emergencies, stuff like crackers, canned meat, jerky, oatmeal, etc. Stuff that will last and doesn't need refrigeration. We're far from preppers, but can get through a week or two at any given time after our regular weekly groceries run out.

We lived through the Florida hurricane season of 2004 when four hurricanes hit in rapid succession. We were fortunate that Jacksonville was the only part of the state to miss a direct hit, but we were on the outer bands of all of them. The state was in chaos for a long time.

I'm going from memory, but I'm pretty sure 1 in 4 Florida houses needed a new roof. I remember flying at the time and seeing thousands of blue tarps covering houses and businesses. Almost all signs were blown down and away. This was before widespread GPS usage, so it was very hard to get around without any signs. This was also before highway exit numbers were painted on the pavement. You be surprised how similar hotels and restaurants look without any signage. It's hard to remember how long the aftereffects lasted, but thinking back to 2004 gives me hope that we'll all get through this coronavirus pandemic.

About a week ago, Lisa went to the store to stock up on our emergency food and household supplies and I supplemented her trip a few days after. Two of my secrets are Pop Tarts and Tang. Lots of calories, some vitamins (especially C), relatively cheap and it will take awhile for Laurel and I to get sick of eating them if that's all we have left. Kellisa will eat Pop Tarts, but gets her nutrition from Ensure Plus and hydration from supplemental water through her G-Tube. Lisa has her dietary standards and her own supply, so I hope we don't get to the point where she needs to eat Pop Tarts and drink Tang. Not because she won't, but because this pandemic will be a 1,000 times worse than it is right now.

My main goal of shopping last night was a few more boxes of Pop Tarts and a couple of containers of Tang. I also wanted to try and get some more meat to get us through the beginning of this lockdown a little better. I was expecting to find empty shelves everywhere, but the store looked mostly normal. Not at all like what I've been seeing on Facebook and in the media. 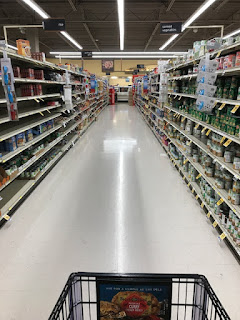 The rice, pasta, Ramen, TP, and fresh meat were long gone, but there was plenty of everything else. I grabbed a couple of large boxes of Pop Tarts (2 for $5- Score!) including a new (at least to us) flavor, Pretzel Chocolate. I grabbed four Tangs ( 2 Orange and 2 Orange Mango). With the fresh meat gone, I grabbed a couple packages of hot dogs, breakfast sausage, and bratwurst. Not the healthiest, but I'm trying to make the best of the situation.

I did see a pallet of TP waiting to be stocked on the shelves, but despite more people than I would expect for 11:30 pm, no one was hoarding the TP. I calmly pushed my cart past since it wasn't on my list. 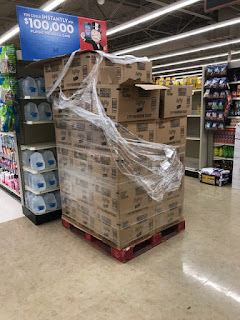 Hopefully the weather is nicer tomorrow and we can get outside.