Best of Both Worlds Tour 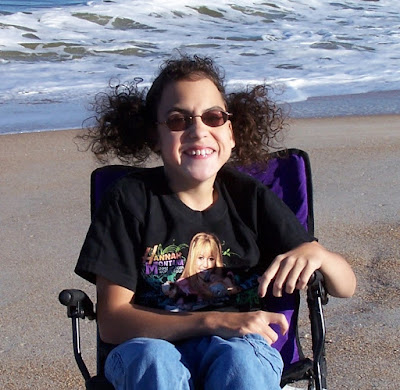 Like most 8-year-old girls in autumn 2007, Kellisa was obsessed with Hannah Montana. When it was announced that Hannah's Best of Both World Tour would stop in Jacksonville in January 2008, I knew we needed to be there.

We decided early on to let Kellisa live as normal of a life as possible, even if we didn't have to and/or it would be easier not to live life to the fullest. Kellisa would have never known Hannah was playing a concert so close, so it would have been easy to not go. But I knew and I also knew if Kellisa was a typical kid, she would know and would be begging and pleading for tickets.

I was at my computer several minutes before the tickets went on sale with my credit card propped up so I didn't have to go looking for my wallet once I selected the tickets. At 10am exactly, I started furiously clicking away and each time I was turned away. I knew the show would sell out in minutes. I started to get nervous after 3 or 4 minutes and still no tickets. Any hope of being on the floor and close to the stage faded and within about 10 minutes, the show was sold out. I failed to get tickets for Kellisa. I was devastated, but at least she would never know, right?

I sent an email to the arena explaining how my daughter uses a wheelchair and asked if there was any chance of getting special seating. Not surprisingly, when they wrote back, I was advised that all the wheelchair seating had sold out as well.

At least Kellisa would never know what she missed. That was the story I tried telling myself, but I couldn't help feeling like I let her down. I didn't realize it at the time, but the mental torture in my head was being suffered by parents across the country as a ticket controversy was growing. Due to unprecedented demand for Hannah Montana tickets, brokers where buying many of the tickets before the general pubic had a chance and turning around to sell them online for hundreds and even thousands of dollars. I never had a fair chance and that did not help my mental state.

Jacksonville was no different than any other city, Hannah tickets on the secondary market ranged from $300+ up in the nose bleed sections to several thousand a ticket to be on the arena floor. I wanted Kellisa to be in the building, but I also wanted her to have a chance to see the stage.

I became obsessed- watching eBay several times a day, every day, hoping to find a deal or maybe the prices would drop as the concert date approached. Neither of which ever happened.

The Jacksonville date was a Wednesday. A school night. I had taken the day off of work, just in case I figured out a way to attend. For months, I was searching for 3 tickets so Lisa and I could go with Kellisa, but since we were now out of time, I searched for 2 tickets together. I figured one parent and Kellisa was better than not going at all, but 2 tickets were just as much or more compared to 3. I started getting crazy thoughts of paying the exorbitant prices. I knew Lisa would be mad, but I was thinking about the old, "Easier to ask for forgiveness than permission" tactic.

A light bulb went off before I could do anything to get myself in trouble, I decided to look for any single tickets. I found one in the upper sections for face value and bought it. I looked for more and found another in the middle sections for 2 or 3 times face value. I bought that one too. I kept searching and a 3rd single seat became available, this time on the floor for 5 times face value. I now had 3 tickets. But first, I had to get some cash from the bank and drive around the greater Jacksonville area like a madman to actually get our tickets in my hands.

It didn't matter that we had 3 single tickets scattered throughout the arena, I knew we would at least get in and I believed we would figure something out once inside.

As I handed our tickets at the door, they were scanned and the man said, "You know these aren't together, right?"

Of course I knew, but I didn't care as we entered the arena which was already electric with thousands of little girls about to have the best night of their young lives.

My first idea was to try and get on the floor, might as well try for the best. We were stopped and asked to present our tickets before we could enter the floor. I handed the lady our tickets with the floor ticket on top. Sadly, she looked at all 3 and said, "These aren't together. Only one of you can enter."

I was expecting that response and then started to plead our case. She couldn't help us, but pointed us in the direction of Guest Services. Once there, an extremely nice and compassionate lady helped us. I didn't even need to beg and plead. She told us to follow her and a few minutes later, we were at a wheelchair section with a perfect view of the stage. But, there was a problem. It was filled with mothers and daughters. None of them in wheelchairs or walkers or giving any indication why they needed wheelchair seating.

The lady from the arena talked to some of the moms and they agreed to make room for us and to their credit, they gave Kellisa the best place to sit. Lisa stood behind Kellisa and I behind Lisa so we didn't block anyone's view.

I am very critical of able bodied people for stealing the extremely few benefits afforded to people with disabilities. From where I was standing, I could see three additional wheelchair sections and not one wheelchair. My emotions were mixed. I was furious, but also thankful to have gotten Kellisa to where she needed to be.

Some of you might be thinking, maybe those other kids had invisible disabilities. Maybe the moms were disabled. All valid points, but before the concert started, a couple of the moms came over and basically told us how they scam to get the tickets by going for the wheelchair tickets first due to lower demand while everyone else fights for the regular seating. They were trying to be nice and share their secret to getting seats, but I also saw it as an admission of stealing something from someone with disabilities.

Rant over. Kellisa was inside the arena! My mission was accomplished and like thousands of other girls for that night, she had the time of her life! This concert was two months before we purchased our first digital camera, so we didn't take any pictures. The above picture is Kellisa enjoying herself at the beach in her Hannah Montana concert t-shirt.

Lastly, it's been over 13 years and my ears are still ringing from all the little girls screaming their heads off for hours inside a building designed to maximize the sound. I heard the tour manager for Hannah describe the crowd as, "Worse than standing behind a jet engine."