Anyone who knows Kellisa, knows she loves spiders!

What you might not know is where her love began.

We can trace this obsession back to when we visited Grand Canyon National Park back in March 2006. We were at the gift store and wanted Kellisa to pick out a souvenir T-shirt. The wall was covered with display shirts and Kellisa was immediately drawn to an orange shirt with a black, hairy spider with 8 legs sticking out the front. We were surprised by her choice and guided her to other shirts, but she kept coming back to the creepiest shirt on the wall to the point she was adamant on her choice. Lisa made the purchase and Kellisa was happy.

Kellisa wore the shirt with pride and loved all the attention. She loved that most people acted scared and shocked because the spider was so large and realistic looking. She wore that shirt every chance she got and we finally had to retire it many months after she outgrew it. We still have the shirt safely packed away somewhere in our garage. When we returned to the Grand Canyon in June 2010, we hoped to buy the same shirt in a larger size, but were disappointed to find the shirt no longer sold at the gift shop.

Over the years, Kellisa has added to her shirt collection with all kinds of creepy shirts. Her vast collection includes spiders, snakes, lizards, alligators, sharks, bees...really anything that would scare the average person. Kellisa's collection has grown to include realistic decorations all over her bedroom. At any given time, you can find a rattlesnake lurking from under her bed to a flying bat circling her ceiling to a giant tarantula staring at you from some dark corner. We never know what we might see in her room and joke that if a real creature somehow got loose in her room, we'd never know it was alive. Kellisa also has an impressive scientific book collection featuring all the creatures she loves. Kellisa can spend hours flipping through her books looking at the realistic photographs.

Kellisa's room is just how she loves it and we need to warn people before they enter her room. They usually look at us like we're crazy and probably think, "How scary can it be?" which is usually followed with a gasp or two, then thanking us for the warning.

Kellisa also loves visiting zoos with the snake house her favorite exhibit. We've even visited a bug museum once. Her younger sister, Egypt has always been around Kellisa and her unusual interests and also loves creepy creatures. I need to pry them away from the snake exhibit if we happen to stumble upon an active snake...they could watch for hours.

Despite wearing that original spider shirt dozens, if not hundreds of times over the few years it fit, we cannot find a single picture of Kellisa wearing it. I also spent too much time unsuccessfully trying to find an image of the T-shirt online. I'll update this post (and probably write another) when we come across her shirt someday when going through the kid's clothes in the garage. 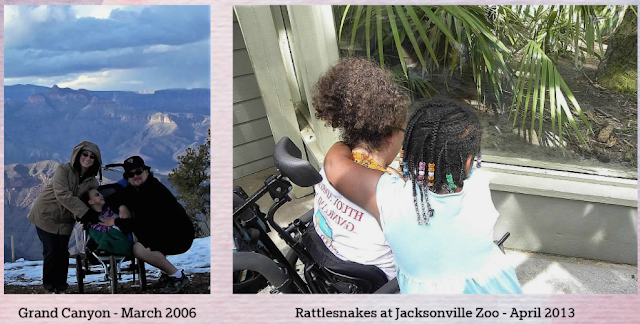