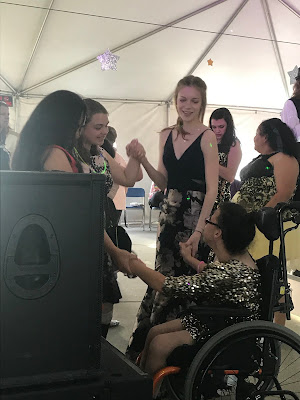 It's easy to find Kellisa if there's loud music blasting from speakers because she will always wheel as close as she can and park herself for maximum exposure. This is true of every dance she attends and PE class at school when they play music in the gym. And she's not shy, if its not loud enough, she will ask for more volume.

Kellisa spent 113 days in the NICU with alarms and bells going off around the clock, so you might assume she was accustomed to loud noises from her early days. You'd be wrong. Kellisa was petrified of noise, any noise, not just loud noise. Sudden noise was the worst. Kellisa would cry uncontrollably for hours when startled. She was inconsolable and would approach hyperventilating. It was horrible.

Lisa and I lived on eggshells. We couldn't even turn on the water at the kitchen sink if Kellisa was within hearing range and her hearing was heightened. One of us would have to take Kellisa to the farthest bedroom, close the door, and hug her with one of her ears pressed against our chest while using a free hand to cover her other ear. This would give the other person a few minutes to make minimal noise in the kitchen. Don't even think about opening a can of pop.

It was always bad when we accidently made a sound or just let our guard down for a second because it would be at least 45 minutes of Kellisa screaming and shaking. While we could mostly control what happened inside our house, controlling what went on outside was a different challenge. Normal noises would send Kellisa crashing, a dog's bark, a motorcycle, kids laughing, literally any sound. Living life on eggshells was not pleasant.

Slowly, extremely slowly Kellisa would get a little better at handling noise. She was always OK with riding in a car and even at her many doctor and therapist visits. We figured it was familiar sounds and she just struggled with unknown and sudden sounds. It didn't matter how loud or soft, any sound was scary.

Eventually, we tried to take Kellisa to a restaurant right before her first birthday. We chose The Lighthouse Café in New Smyrna Beach, FL for this experiment in sound. We made it to the front door and as soon as I opened it and we were hit with noise, Kellisa started her meltdown. We left defeated, but wouldn't give up. A few months later, we returned to The Lighthouse Café. We made it to the Hostess Counter before having to leave.

This was repeated every couple of months and eventually we were seated, but left before ordering. Then, we ordered, but would have to leave before the food arrived. You guessed it, we ordered, the food arrived, and then a plate broke on the floor and we left without eating. We probably went to the restaurant 12-15 times and never ate a meal inside. We relocated to Jacksonville and continued our quest to eat out with Kellisa. At some point, I believe it was at an Olive Garden, we finally made it through a meal without having to carry Kellisa away. We always said we would go back and eat at The Lighthouse Café, but sadly it closed before we got the chance.

Kellisa still jumps at every little unexpected sound, but she is likely to giggle and brush it off as funny. She hasn't cried in probably close to 20 years from a loud noise. Kellisa has loved music since Lisa found The Wiggles on the television in the hospital when she was 4 (story can be found here). Since Kellisa discovered her love of music, she loves it loud!