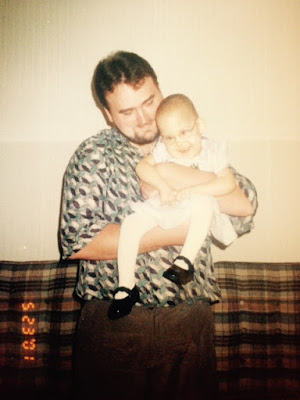 Kellisa calls me "Ah" instead of dad or daddy. For those who haven't heard her call me Ah, I describe it as, "it's dad without the Ds."

20 years ago this month, Kellisa went in to the emergency room at Arnold Palmer Children's Hospital in Orlando, FL where it was determined she needed emergency brain surgery. Kellisa has gone through 23 surgeries in her almost 22 years of life, but in May 2001 it was her 7th total, and at the time, 5th brain surgery.

Before they wheeled her away for surgery, we found out that the insurance we had through my employer at the time denied the surgery. In their opinion, it was not necessary even though one of the world's leading pediatric neurosurgeons deemed it not only necessary, but an emergency which should be performed as soon as possible to prevent further damage.

As I was getting my HR Representative involved, Lisa was working with the hospital and neurosurgeon to explore our options. We could see Kellisa was suffering and sided with the belief she needed emergency brain surgery to relieve the pressure caused by a failing shunt. We were unable to convince the insurance company to cover the surgery, so we committed to paying the hospital and neurosurgeon out of pocket- not a percentage, but 100%. We hoped that we could appeal, beg, and plead our case after the surgery.

We gave the neurosurgeon everything we had and charged every credit card we had to the max after having limits raised. When we left the hospital a few days later after a successful surgery, we literally had 84 cents to our names and just enough gas in our car to get us the 69 miles to our house. We had limited food in our house that would have to last a week. Thankfully, Kellisa was still breastfed and we had a weeks worth of diapers.

Lisa and I survived on water, some old crackers, rice, and other scattered undesirable food until I got paid again and we could buy a few groceries. I rode my bike to and from work because we couldn't afford to use the remaining gas in case we needed to drive Kellisa somewhere. For months, we could spend about $20 a week on food. I would buy 2 packages of frozen burritos and a 10 pack of 3 Musketeer bars for myself. That is all I ate after deciding it was the cheapest purchases I could survive on for a week. The remaining $16 dollars a week went towards Lisa's food and household necessities. Lisa survived on a jar of peanut butter, some bread, and a few apples.

A week after Kellisa's surgery, she turned 2-years-old (pictured above). A huge milestone!

We went back and forth with insurance and ultimately lost our appeal. We were on the hook for brain surgery even though it was obvious Kellisa needed it now that she was back to her normal self. It was like we mortgaged our future to pay for this surgery and it ended up being a 20 year mortgage as Lisa just paid the last of the obligations earlier this year.

I will finish this story by answering why Kellisa calls me "Ah".

I was changing Kellisa's diaper on our bed one day when she looked up at me and said, "DAD" with a big, beautiful smile. I tried to call out for Lisa, but I was now the one speechless as Kellisa was far behind on speech milestones and this blurting out a word was unprecedented. Eventually, I was able to get Lisa's attention and we both heard her say a loud and clear "DAD" a few more times. From her smile and facial expressions, we could tell she was very proud of herself.

Less than 24 hours latter, we would find Kellisa limp and lethargic before rushing her to the hospital at the beginning of this story. She would wake up after the surgery with the life saving hydrocephalus pressure relieved, but she has never said, "DAD" again. In fact, she does not have the ability to make the D sound for any word. We now joke that the neurosurgeon drilled through the part of her brain that controlled the D sound and it's probably accurate.

While I can still picture her on that bed with a smile and I can still hear her perfect "DAD" in my memories, I'd give anything to hear it again or be able to watch it on video. We had no way of knowing those would be the first and only few times Kellisa would be able to say, "DAD."