Our first father/daughter Spring Break trip happened in 2008. The main objective was to reach the Highpoint of Oklahoma. The plan was to fly to Amarillo, TX and have our cousin Matt pick us up, as he was able to join us for this trip. However, we almost did not make it to Amarillo. We had a stopover in Dallas that included a severe seizure that lasted longer than 5 minutes. Paramedics had to be called and airport police also hustled to the scene. Just as everyone was arriving, Kellisa popped out of her seizure.

Since the paramedics were on scene, they had to check Kellisa out. At the same time, a police officer starts questioning me about Kellisa. "Where is her mother? Is she Hispanic? Do you have the mother's approval to be traveling out of state?" I did not let the questions bother me as I figured he was just doing his job in a border state. Kellisa checked out OK and they offered to transport her to the hospital for further evaluations. Did I ever miss Lisa at this point. We are use to making joint decisions in these situations.

If we go on...am I just being selfish? Would I ever forgive myself if something happened in the air?

If we stay...we are entirely stuck in Dallas and for how long? Matt will be waiting in Amarillo for a long time.

Even though Kellisa struggles with communication, we try and give her a say in these situations. Kellisa was looking good as she did not have the usual paralysis that follows even a mild seizure. I'm sweating bullets as I ask her if she is OK and ready for one more airplane ride. She answers "Yes" and that was good enough for me.

We were far from our gate and it was past the departure time. We hurry to the gate and to our good fortune, the gate agent has held the plane because he had seen us at the gate earlier and knew we where around somewhere. He was also listening to the rescue on his radio and assumed it was us. I was very appreciative that he held the entire plane about 15 minutes just for us.

How about one more problem? We fly Southwest and they are well known for not assigning seats. With Kellisa, we are always the first to board. However, being the last on a full flight would mean that we both would get stuck with middle seats and who knows how close together? I think the gate agent saw some fear in my face and correctly assumed why it was there. He told us not to worry because he had the flight attendants hold two seats in the front row. Gotta love Southwest! The flight was uneventful and we met Matt at the airport just as planned.

The following day we made the long drive to Black Mesa as we introduced Matt to Hannah Montana. Almost 4 years later, he can still sing some of the songs he heard that spring day.
Kellisa is all smiles at the start of the hike: 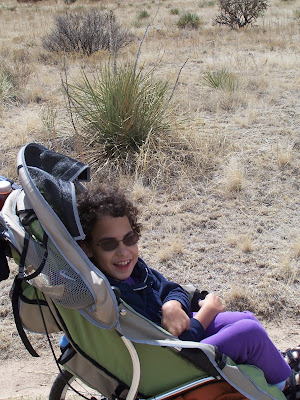 Views along the trail: 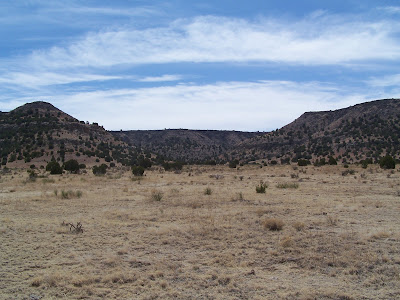 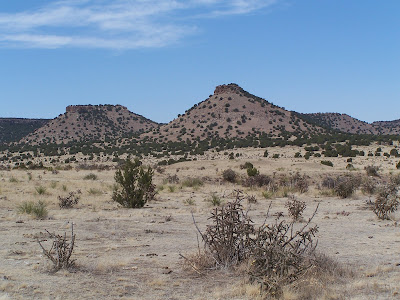 Most of the elevation gained on this hike can be seen in the picture below as the rocky trail works it's way up the side of Black Mesa: 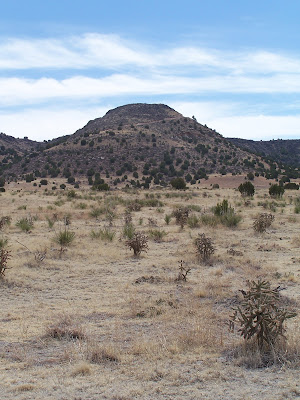 The next 8 pictures were taken by Matt as I pushed Kellisa up the trail to the top of Black Mesa: 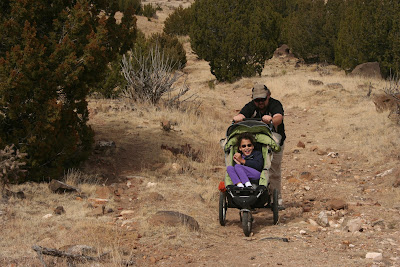 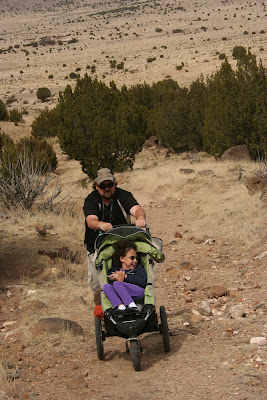 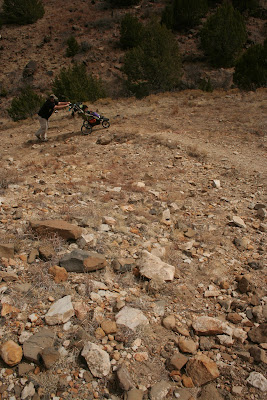 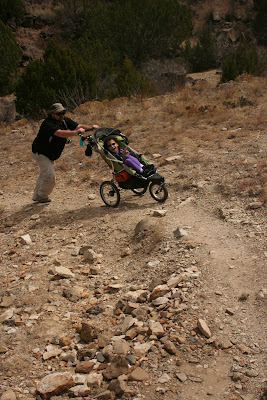 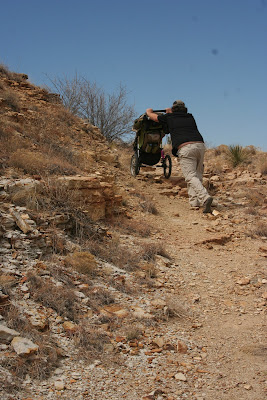 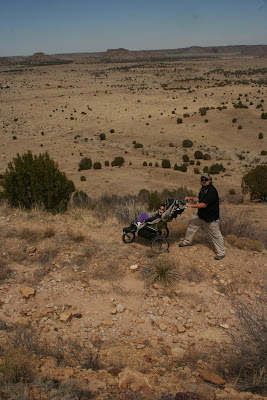 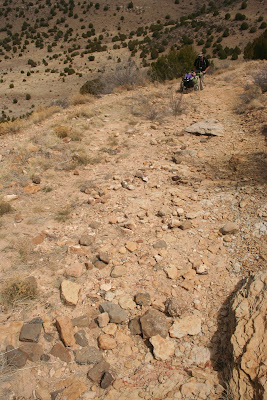 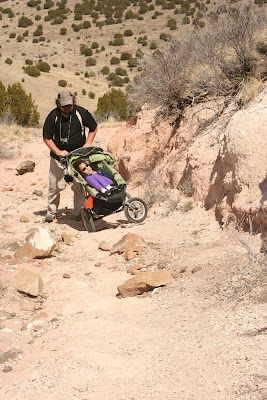 Looking back over the landscape from the top of Black Mesa: 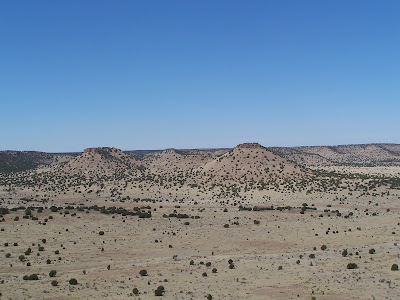 Even though we made it to the top, we still needed to hike approximately 30 minutes along a relatively flat trail to the granite monument that marks the actual high point: 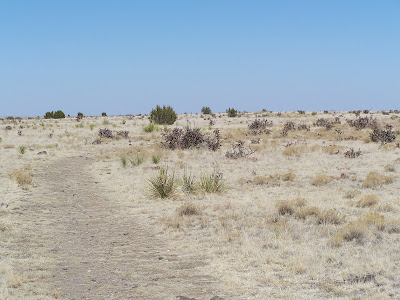 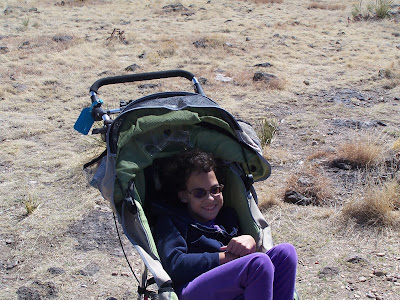 The top of Oklahoma: 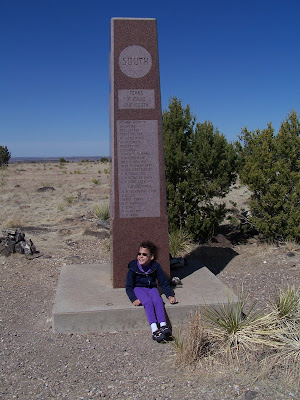 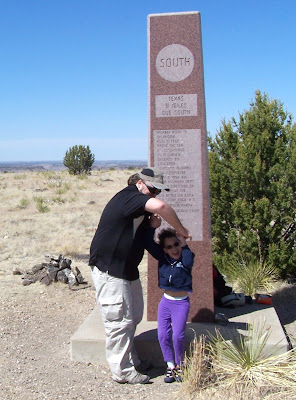 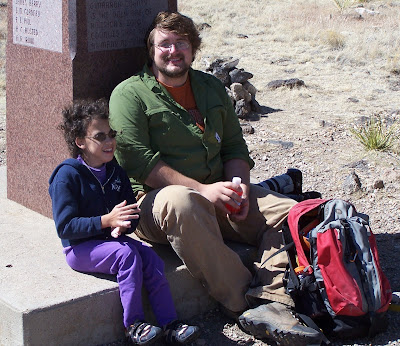 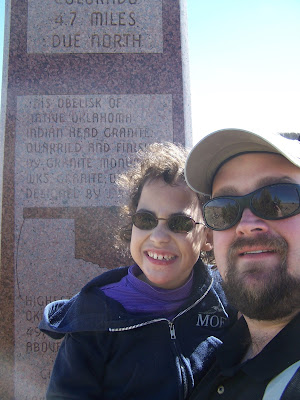 At the edge of Black Mesa before we started our descent: 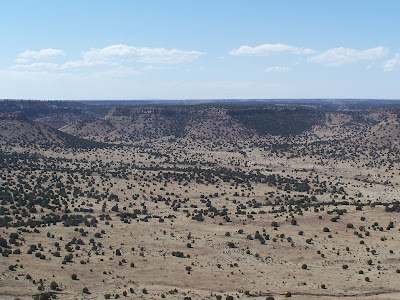 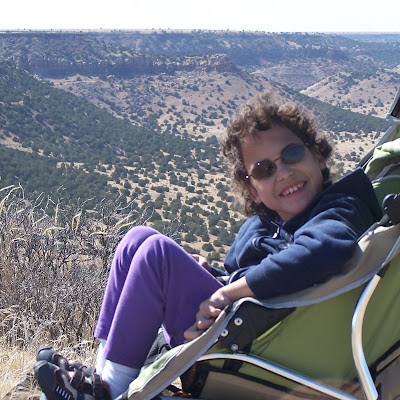 Kellisa still smiling back at the car: 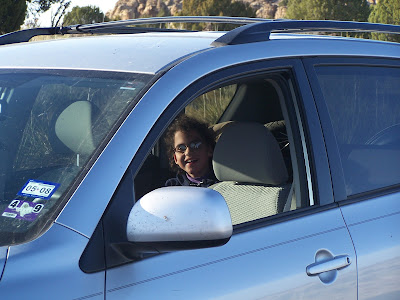 Beautiful sunset as we leave the highpoint area: 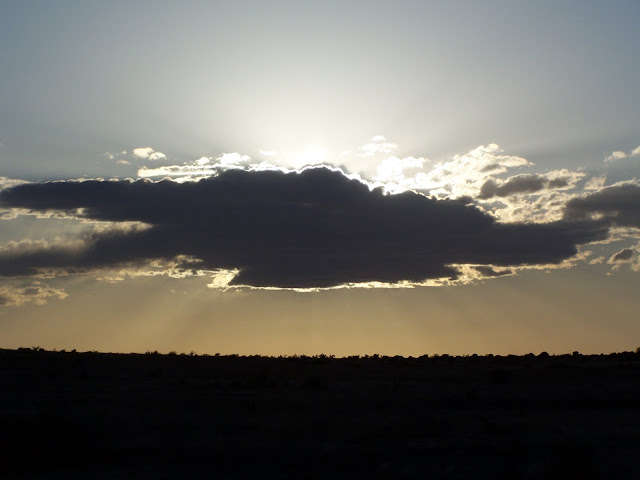