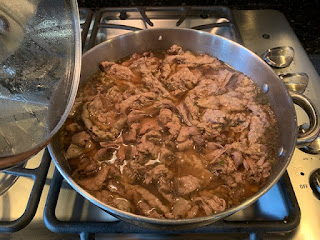 If I ever find myself in a position to request a last meal, Chicago Italian Beef would probably get the nod with a side of pepperoni pizza. We were fortunate to have an outstanding little joint (Matty's and then Murph's) serving Italian Beef about a block away from where I grew up on the NW Side of Chicago. It was a treat to get an Italian Beef with fries as a kid. It was also a big deal to go alone with 50 cents and leave with "Gravy Bread" wrapped in aluminum foil. As I got older and eventually moved to the SW suburbs, we found other places with excellent Italian Beef sandwiches. In fact, I don't think I've ever had a bad Italian Beef in the Chicagoland area.

Eventually, we found Portillo's and they became our "go to" because they have many locations in the Chicago area. We moved to Florida in late 1999 and would always have at least one Italian Beef whenever we returned to visit family. After a couple of years a little south of Daytona Beach, we relocated to Jacksonville and quickly found Caddyshack, an establishment a half hour away, owned by Bill Murray and his brothers. They would fly Italian Beef from Chicago down every day. We would still try to have an Italian Beef whenever we returned to Chicago, but it was less of a priority.

We moved to Northern California four years ago and have yet to find a good Italian Beef place. I take that back, we did have a great sandwich from a food truck shortly after moving, but we forgot the name and have never seen the truck again. It was a husband and wife from Chicago who owned the business. We've had some horrible Italian Beef from a few places, even after they assure me it's "authentic" Chicago.

So, after five weeks of being locked down inside our house while watching family and friends post pictures of food, several made their own Italian Beef and a few who went to Portillo's, I decided it was time to attempt to make our own.


Online recipes were easy to find and many claimed to be "Chicago Italian Beef" despite significant differences. Some would take many hours and appeared to be beyond my abilities and patience level. I zeroed in on a few of the easier looking recipes and made a few adjustments to account for what we had in the house and could easily purchase during this crazy COVID-19 pandemic.

I won't pretend the recipe below is authentic or would fool anyone who knows a real Chicago Italian Beef, but what I can say is this recipe was easy, fed us for 2 nights (plus I had two gravy bread sandwiches for dinner on the third night), and it was close enough to excite the entire family, including my very picky standards for Italian Beef. It definitely hit the spot and satisfied a craving.

I will acknowledge, Chicago Italian Beef sandwiches are usually garnished with peppers and Giardiniera. Laurel is not a fan of peppers and I'm not a huge fan of Giardiniera, so those were left off. I do like BBQ sauce on mine (so does Laurel) and we used our favorite, Stubb's.

All measurements were heaping.

* I plan on adding a little Worcester Sauce next time. *

Simmer over low heat for 45 minutes 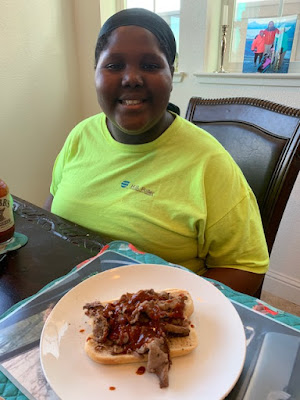 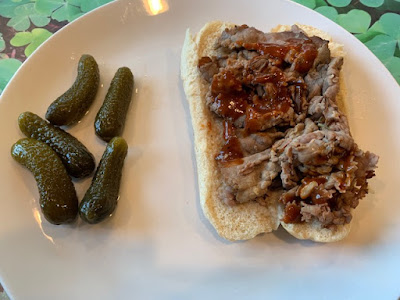 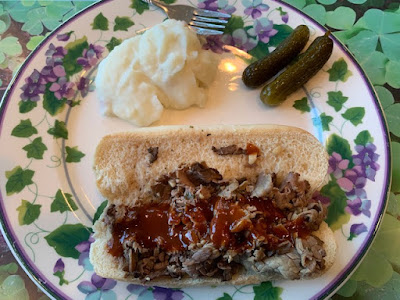 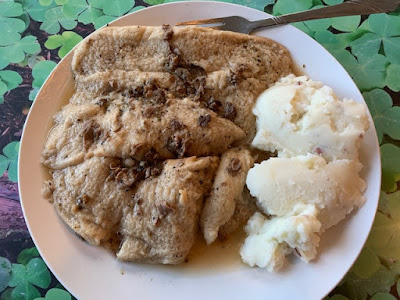 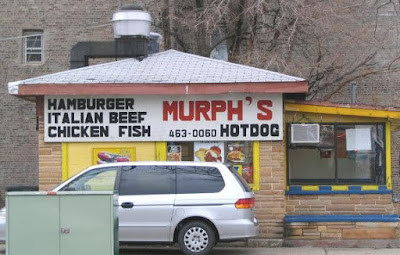