Back in November, Kellisa had some routine blood work done. Not thinking too much about it, we lost track until the doctor called with some alarming news. A couple of Kellisa's hormones were off the charts, almost 5 times higher than her previous tests. The doctor suspected a tumor on her adrenal gland and recommended a CT Scan. When the doctor's office called back and told us the CT Scan was scheduled in only two days at Wolfson's Children's Hospital, we knew it wasn't good. Kellisa has had many CT Scans for her hydrocephalus and shunt. CT Scans scheduled that quickly can only mean that the doctor is very concerned and wants the results as soon as possible.

The CT Scan was scheduled for Tuesday, December 4, 2012. As always, Kellisa was a trooper and it went well. We were told to expect the results from the doctor in a week. Not that you would want any tumor, but a quick google search told us that a functioning tumor on the adrenal gland was definitely a tumor you DO NOT want! During this waiting period, I couldn't focus or sleep as my mind was constantly racing with horrible thoughts no matter how hard I tried to block those thoughts.

Kellisa has overcome many difficult medical issues over the years and I can say that it does not get any easier with all that we've been through as parents. If anything, it gets harder to deal with because you know that sooner or later...

Kellisa went to see Holiday Pops with The Jacksonville Symphony Orchestra on Friday, December 7, 2012. I can say with 100% certainty that Kellisa was the only attendee wearing a spider shirt: 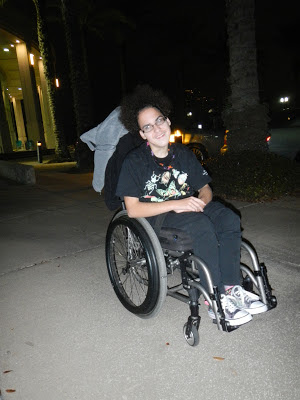 A huge thank you: Glenn and Rick for the amazing seats!

On Sunday, we went to the beach with Kellisa's new Freedom Push Chair: 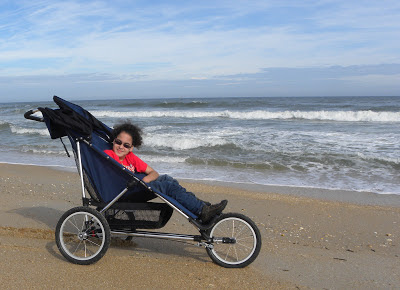 One week had finally passed and we were anxious to hear the results and start dealing with the diagnosis. The doctor called Lisa in the morning with the unbelievable news- the CT Scan was negative! No sign of a tumor! Kellisa had many people thinking about her and praying for her and we can't thank them enough! We were hoping for the best, but this was even better! The worst case was avoided!

With the positive CT Scan and no other symptoms, the doctor doesn't want to do anything else at this time. It still hasn't really settled in yet, but it's going to be a great holiday season for Kellisa!