"Student with a Weapon" 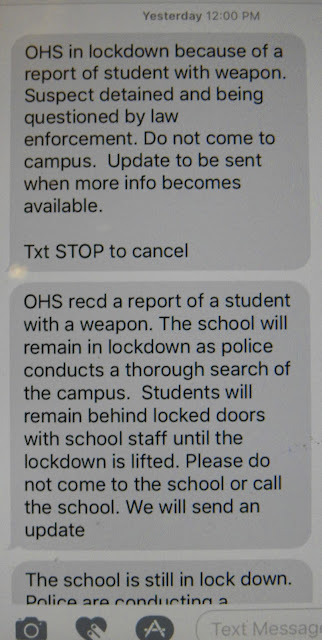 Yesterday, I was 1,800 miles away from home in San Antonio, TX for work. We enjoy some major perks because I travel for my job, but there is always a little worry in the back of my mind that I'm so far away if something happens back at home. Thankfully, this rarely happens, but yesterday it happened.

At noon local time, I started getting texts, emails, and automated phone calls from Kellisa's school about a student with a weapon. They weren't releasing much information and the lockdown continued for just over two hours. I was relieved the school wasn't using the phrases, "Active Shooter" or "Shelter in Place", but the texts were very scary none the less. It didn't help to consider that Kellisa can't recognize danger, can't get on the floor by herself, can't crawl, can't remain quiet (I picture her giggling at all the excitement), can't jump out a window...she is 100% dependent on others for her safety and that's a chilling thought, especially when I'm not with her to be her protector. Lastly, Kellisa can't communicate like most other high school students. Therefore, we didn't get texts or calls from her telling us that she was safe.

Parents were asked not to come to the school, but if you wanted to get close, school officials and the police had a meeting place set up at a nearby park. The entire incident lasted just over two hours with little information and no confirmation that Kellisa was safe. It was hard to concentrate on work and even harder not knowing what I should do, if anything.

Eventually, an aide in Kellisa's class called to let me know that she was safe and the lockdown had ended. Another hour went by before I got a text from Lisa, "Both kids are home safe".  It was a huge relief, but I'm sure it took a few hours to get my blood pressure and heart rate down to normal levels.

The early reports indicate that one student stole a gun from a relative and brought it to school to sell to another student. The loaded gun was found in a backpack in the gym. Both students have been arrested and police officials believe there was never a plot to shoot anyone at the school.