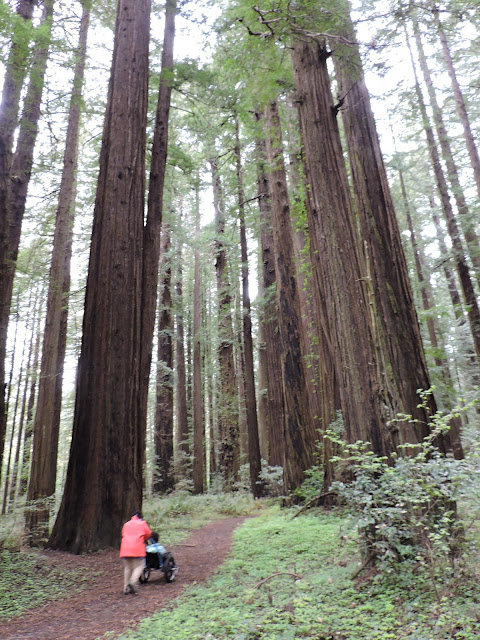 We knew we wanted to start hiking in all 58 counties in California, but we had no idea where to start as the girls started their Spring Break. It was already getting hot in the southern California Desert Counties, plus those are the farthest and we had a late start to the week off due to Laurel's participation in the 2017 Sacramento Doggy Dash. Most of the central valley counties were flooded from the unusually high amount of rain that has fallen in the last few months and most recreation areas are closed. The Sierra Nevada counties are still covered in snow measured by the feet and rain was forecast for much of the rest of the state during our week off in April.

We turned our attention to the far northwest of California which is known for it's Redwood Forests. Yes, rain was predicted for every single day, but the temperatures would be reasonable and we knew that we would not have to deal with snow or a long drive. The girls are desperate to go camping since it's been well over a year since we've gone, but with all the rain in the forecast, I decided to get us a hotel in Eureka for the week to use as our dry base camp.

We had no idea when we picked this trail, but some of you (Star Wars enthusiasts) may recognize the picture above or some of the pictures below as the redwood forest where the famous Speeder Bike Scene in Return of the Jedi was filmed. Laurel was anxious to share this fact with the "boys" at school who love the Star Wars movies. For those interested, we've posted the chase scene below.

However, before we ht the trail, I was worried. We were the only car in the small parking lot deep in the redwood forest. As I was getting everything ready for our hike, Laurel did what most 7-year-olds would do in her circumstance, she began exploring, asking questions, climbing and balancing on slick wet things as she bravely inched farther away from the safety of her father. This is when an old pickup truck pulled in to a spot near us and two rough looking men emerged. I hate to judge and I definitely don't want anyone judging Laurel or Kellisa, but I couldn't help but get a bad feeling.

I often tell people that I'm usually more worried about other people than wild animals or poisonous snakes and this was definitely one of those times. They quickly headed off on the only trail in the grove while I considered finding another trail to hike. We were so close to ready and the process is lengthy, so I decided to hike the trail as intended.

I knew the trail was a loop and I watched the men start off by going right. I was afraid that we might catch up if we went the same direction and then there could be interactions and awkwardness. I picked the left trail knowing that we should only encounter these men once on the trail. 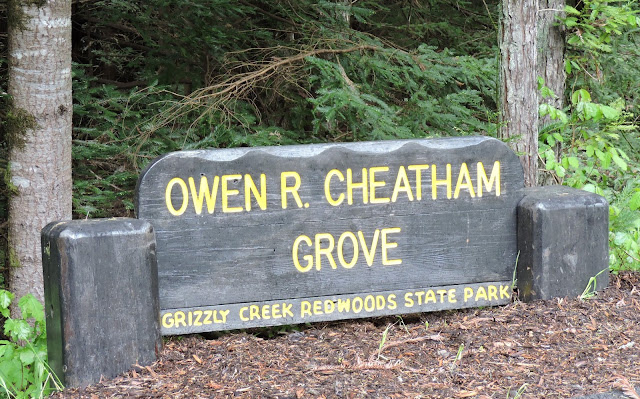 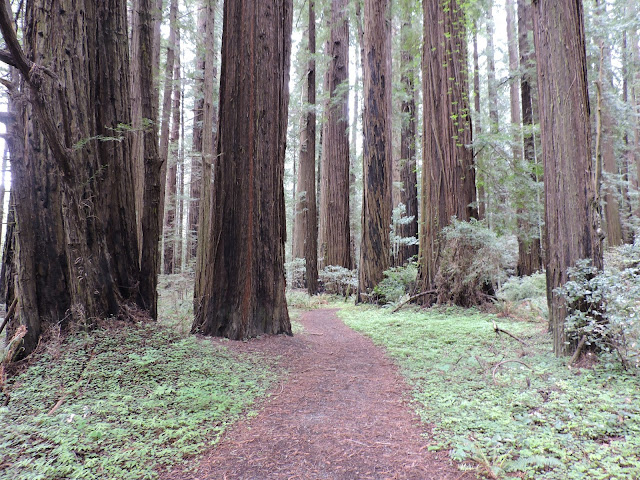 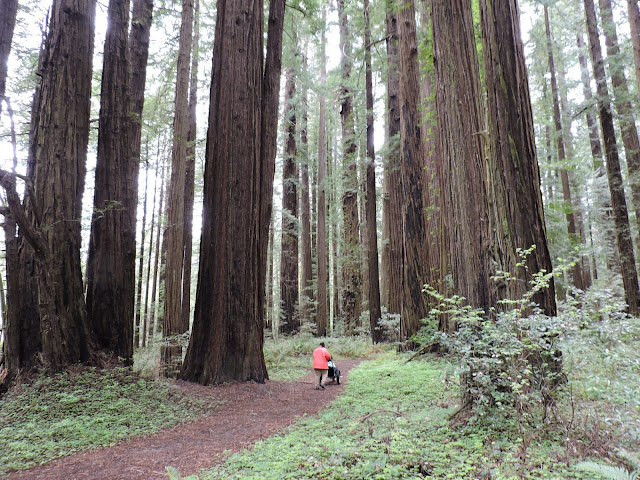 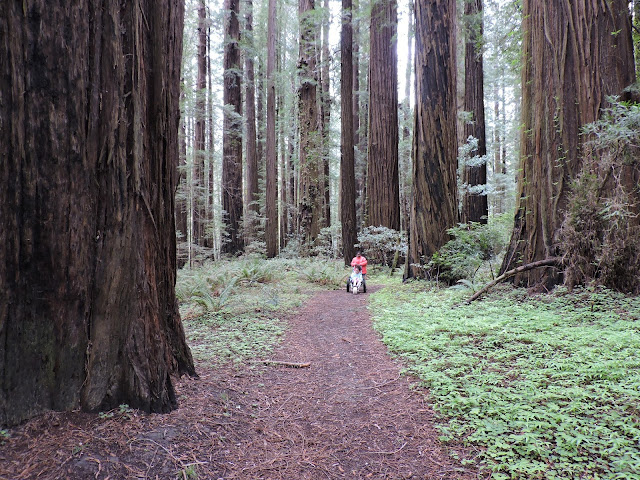 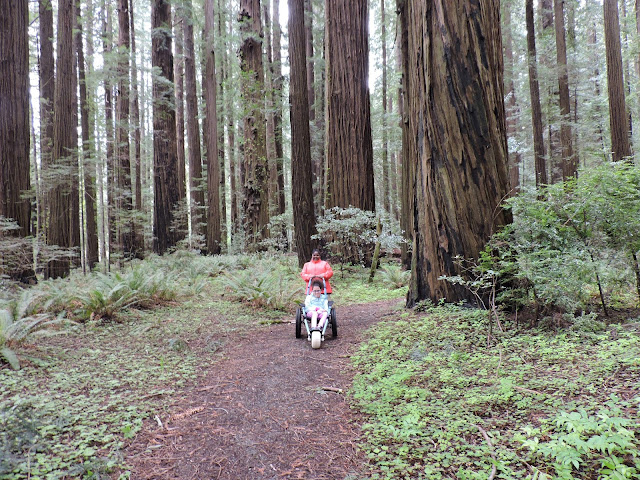 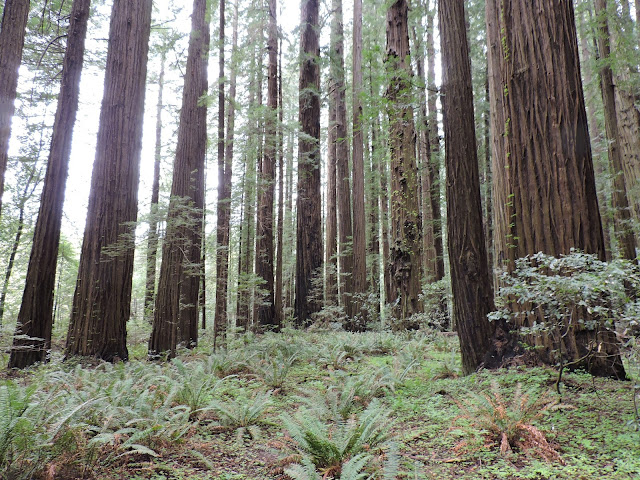 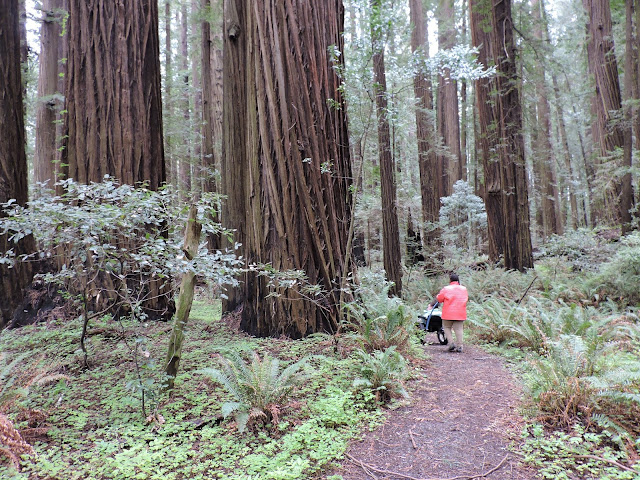 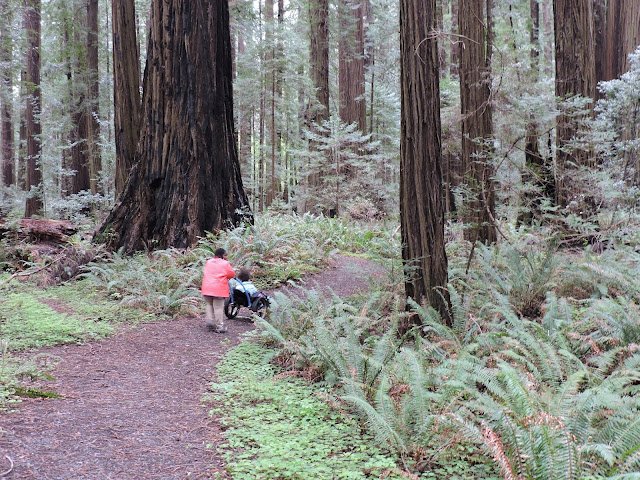 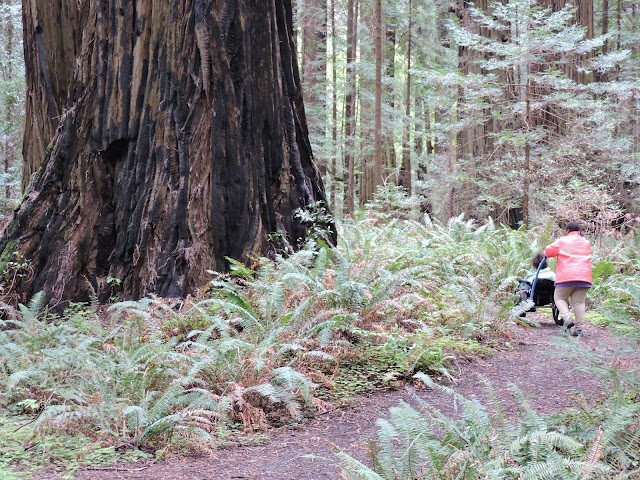 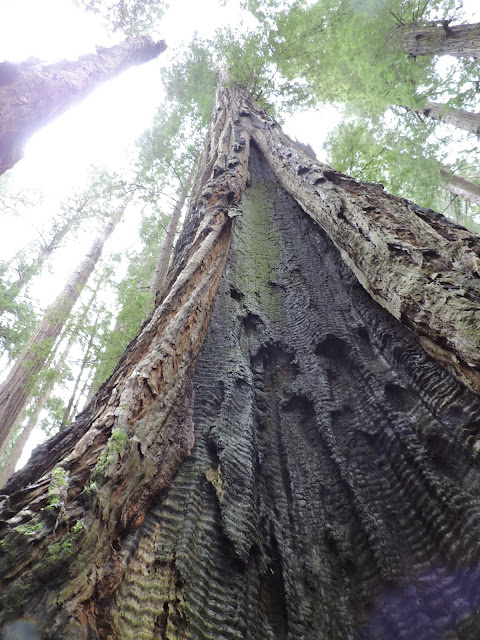 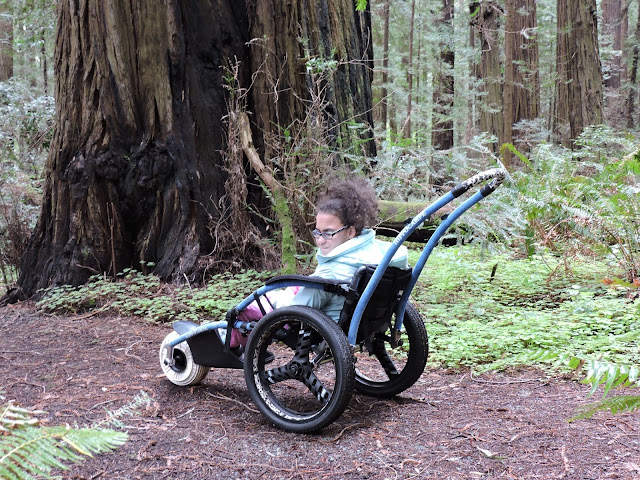 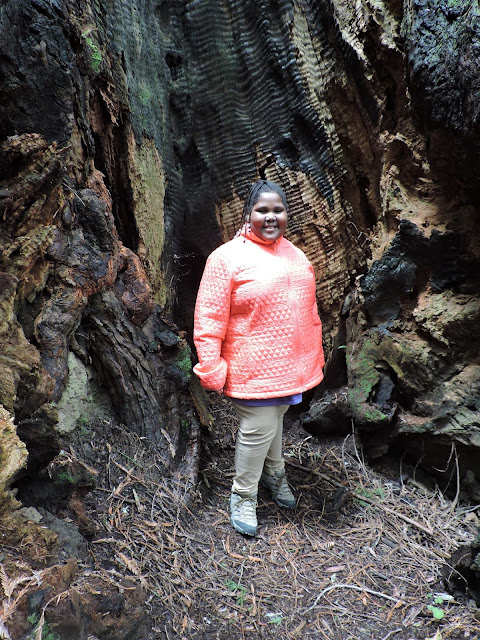 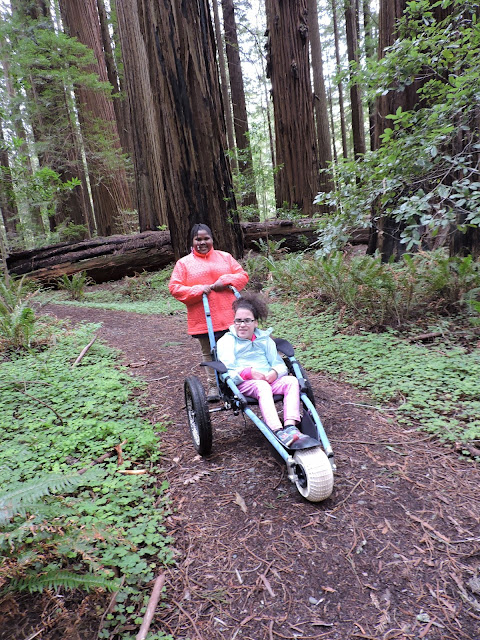 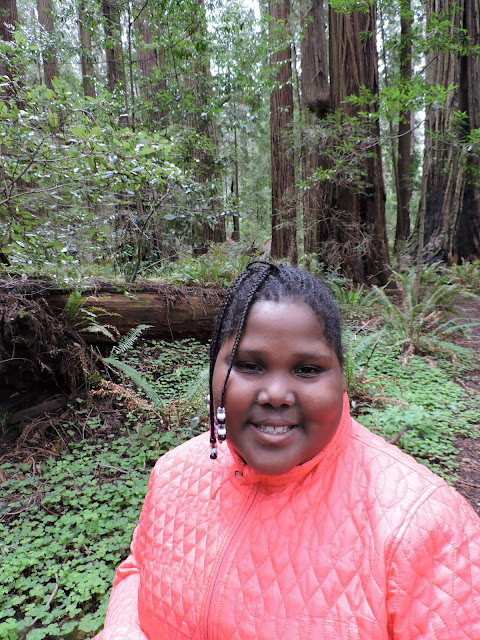 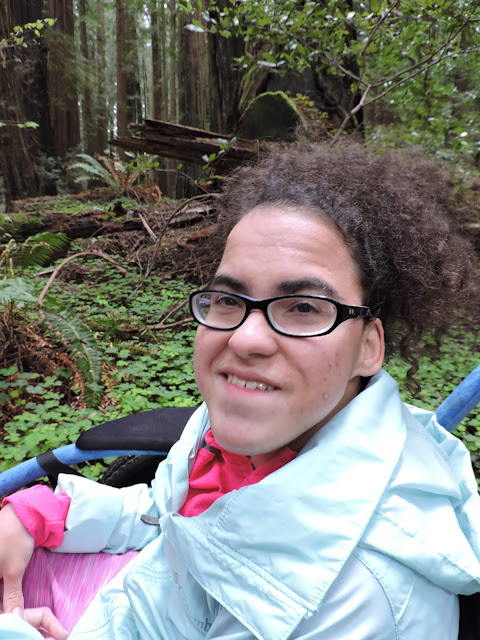 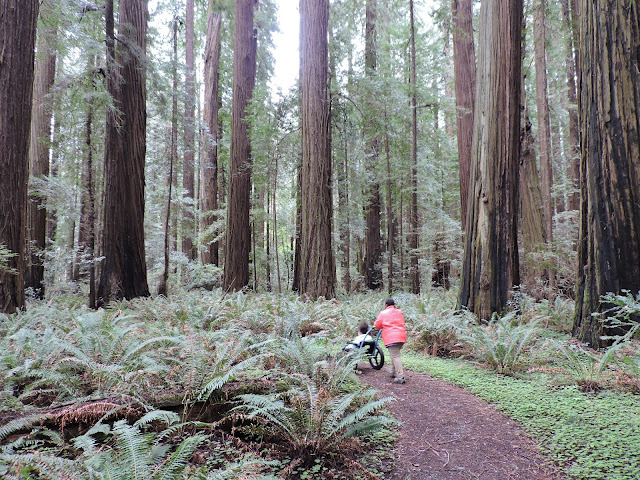 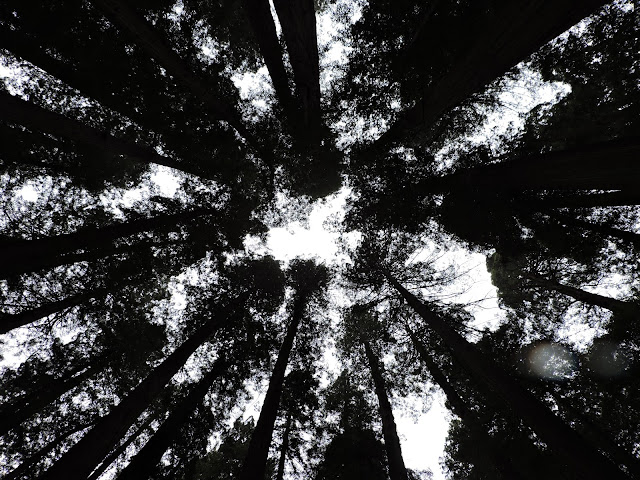 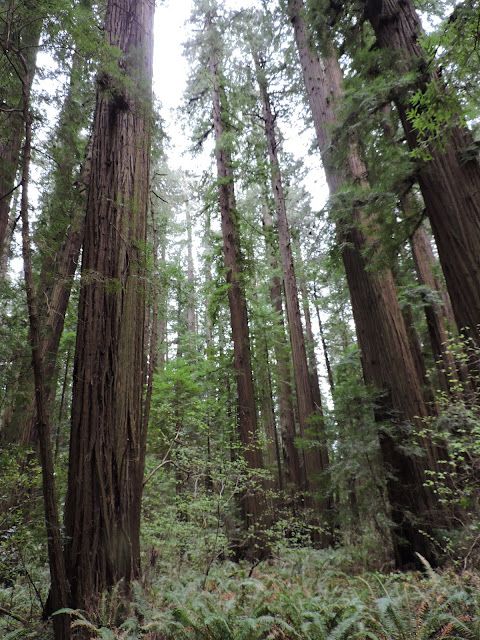 We were enjoying the trail so much that I had forgotten about the other hikers sharing our trail when they reappeared a short distance in front of us. My stomach dropped because they appeared even scarier deep in the forest. As they hiked closer, I noticed that they were hiking with a certain bounce in their steps and I could see the smiles on their faces in between giggles. They were having as much fun as we were on this magical trail.

As our paths crossed, they briefly stopped to point out a large tree off the trail that was worth a side trip to explore in their opinion and they also told Laurel about a hollow redwood coming up that was so big that we could fit inside.

Just like that, they went on their way and we continued on our adventure. I was just as wrong as anyone who thinks Laurel doesn't belong in the forest because of her skin tone and/or Kellisa because of her disabilities. Although, thinking back on it, I guess I have a certain responsibility for keeping the girls safe and to minimize the risks posed to them, so I don't feel too guilty. 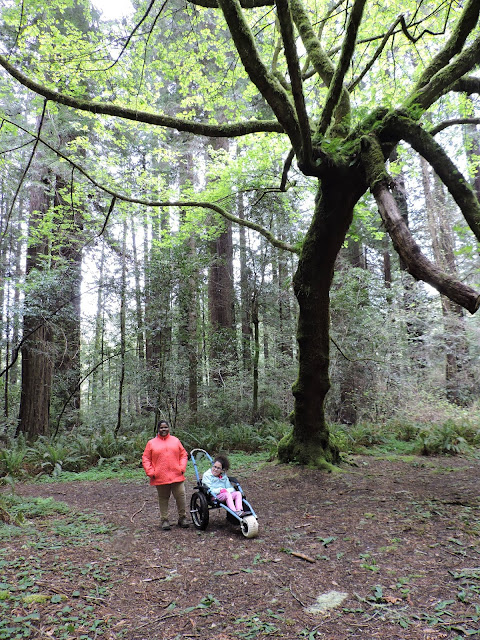 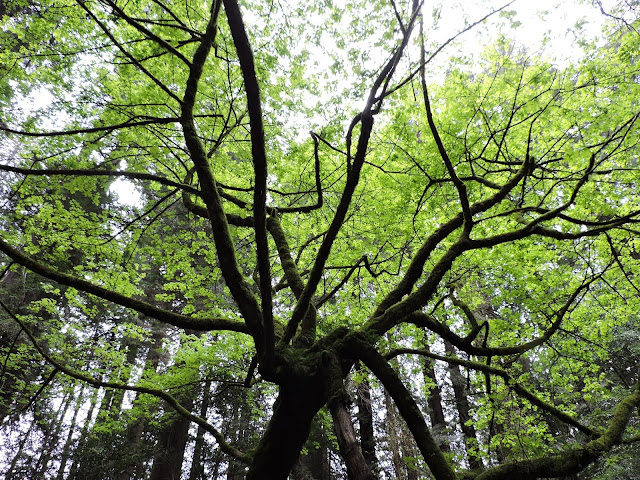 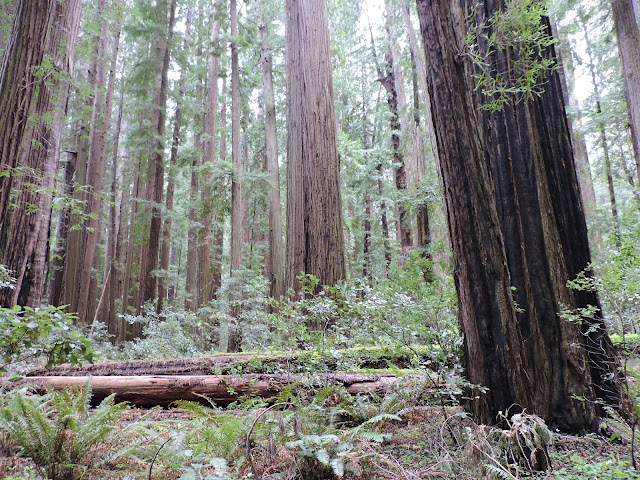 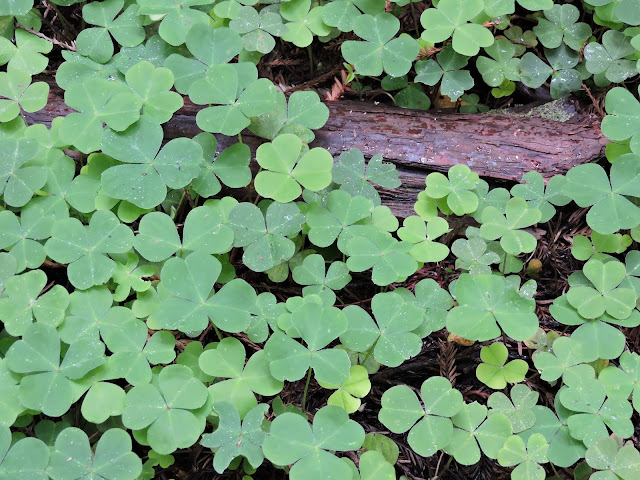